Maui Police Chief Thomas Phillips will retire on June 1, 2009 after serving 33 years with the department, nearly 11 of them as Chief. 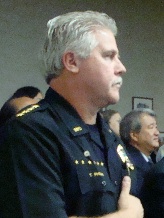 “It has truly been an honor to serve as your Chief, and I want to thank each and every one of you for the job that you do each day to make this community safe,” said Phillips upon publicly announcing his retirement Friday.

“Having traveled to many parts of the country this past decade and learning about police agencies nationwide, I can’t think of a better department than ours. This is because of you and your continued dedication to the community we serve. I am leaving at a time when I still love this job and look forward to coming to work each day, but it is time to move on and spend a little more quality time with my family,” said Phillips.

“I am confident in the youthful leadership of our Department, who, along with the next Police Chief, will lead this agency to excellence in the very challenging economic times to come,” Phillips said.

The milestones of Chief Phillips career are as follows:

Maui Police Department’s Police Commission will be meeting on March 9, 2009, to discuss, and finalize the application process of selecting the next Chief of Police.