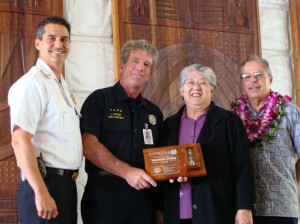 Maui Firefighter Lawrence Larry Crilley was honored today with the Kahuola Award for his efforts in going beyond the call of duty to save a life.

Crilley was off-duty and at the beach fronting Tavares Bay on April 27, 2008 when he responded to a swimmer who was floating face down in the water.

After retrieving the man and finding no breathing or pulse, Crilley began CPR. Realizing that there may be a possible spinal injury, he also prevented other on-lookers from moving the victim until first responders arrived to take over advanced care.

The victim has since recovered from the incident and expressed his thankfulness to those involved in the rescue.

“Every fireman would do this, I just happen to be the one that was there,” said Crilley in accepting the award.

Crilley (who is stationed in Kihei) has been in Hawaii for 9 years, but is a firefighting veteran, having served previously in New York.

The greatest difference between the two locations, he says, is not the amount of calls that firefighters respond to on Maui, but the amount of people you know when responding to calls.

Crilley was nominated for the prestigious award by Capt. Michael MacDougall who works alongside him at the Kihei Station.

In a letter nominating Crilley for the award, MacDougall said, “I believe Larry’s intervention made it possible for the victim to make a full recovery and prevented possible spinal injury.”

(Story & Photos By Wendy OSHER © 2009) *** If you enjoyed this post, you may also like our story on Fire Prevention Week in Maui County.