The state is being blamed for allegedly contributing to a population decline of the critically endangered palila bird on the island of Hawaii.The president of the Hawaii Audobon Society says the state is not taking effective action to keep sheep out of the palilaâ€™s critical habitat.According to the agency, the sheep, goats and mouflon are known to destroy native mamane and naio trees on which the birds depend to survive. 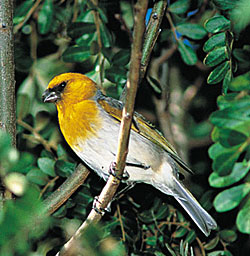 The environmental firm Earthjustice says the state was issued court orders in 1979, 1987 and 1998, after being found in violation of the federal Endangered Species Act, by maintaining the destructive animals in the federally listed birdâ€™s last remaining habitat.

Earthjustice, which is representing the Audobon Society, and the Sierra Club, says the palila population has subsequently plummeted by more than 60 percent in the last five years.The estimated population last year was between 2,200 and 2,600 birds.Thatâ€™s down significantly from the estimated 6,600 bids reported in 2003.

State officials carry out periodic aerial hunts in an effort to control the sheep population.Efforts to contain the population are also allegedly challenged.In a statement released by Earthjustice, the firm claims a 55-mile fence surrounding the forest has fallen into disrepair, allowing the sheep to access the area from surrounding lands.