The Maui Police Department’s Lieutenant Wayne Ibarra, becomes the islands latest graduate of the FBI National Academy Program.Â Â  Ibarra is a Watch Commander with the Wailuku Patrol District and a 21 year veteran of the department. 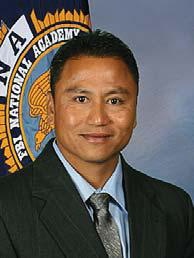 Internationally know for its academic excellence, the National Academy Program, held at the FBI Academy, offers 11 weeks of advanced investigative, management, and fitness training for selected officers having proven records as professionals within their agencies. Â A total of 42,459 graduates now represent the FBI National Academy since it began in July 1935. Of that number, more than 23,000 are still active in law enforcement.

For the physical fitness, he received a Yellow Brick (running) and Blue Brick (34 mile swim challenge).

There were a total of 257 attendees, consisting of men and women from all 50 states and 20 countries.

Lieutenant Ibarra is married to Janice and they have 3 children- Tehani, Sydney and Tyler.

20 RECRUITS GRADUATE INTO THE MPD RANKS