Forecasters from the National Weather Service say Felicia is the strongest hurricane in the Eastern Pacific since hurricane Daniel of 2006. 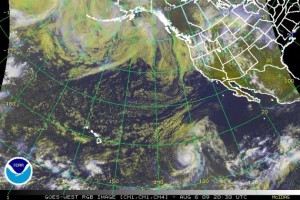 Hurricane Felicia is now located 1490 miles east of Hilo Hawaii.Â  Winds for the category 4 Hurricane have decreased slightly to 135 mph.Â  Slow weakening of the system is forecast during the next couple of days as feclicia moves over cooler waters.

The official forecast will keep Felicia as a Tropical Cyclone through the next five days, though the strong shear could even weaken the system to a Remnant Low by Day 5.

Hawaii could begin to see impacts of the system over the weekend in the form of heightened surf, and increased gusty winds and locally heavy rains around Monday if Felicia remains on her current track toward the islands.

Forecasters from the National Weather Service and the National Hurricane Center say that while Felicia is moving toward the northwest at 10 mph, and a gradual turn to the west-northwest is expected over the next 48 hours.

FELICIA DISCUSSION:Â  (Provided by Forecaster BLAKE with the NWS and National Hurricane Center) 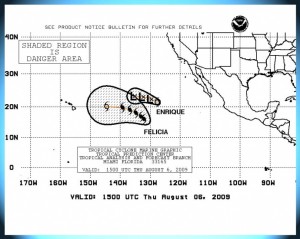 (Click on Image to enlarge. Map for mariners indicating danger area from Felicia as of 11 a.m. 8/6/09. Image Courtesy: NOAA, The National Weather Service and The National Hurricane Center.)

Visible satellite images show a classic major hurricane with an eye of about 20 nm in diameter and apparent mesovortices rotating around the center.Â  Cloud tops have warmed a little bit in the eye-wall…and objective t-numbers have come down slightly from this morning.Â  The initial intensity will be reduced to 115 KT in good agreement with recent DVORAK intensity estimates from TAFB and SAB.

A continued slow weakening of the hurricane is likely due to progressively cooler waters in its path.Â  This decrease in strength is expected to be tempered by Felicia having some annular hurricane characteristics.Â  This annular structure in combination with low wind shear for the next couple of days could enable the system to maintain its intensity more than it normally would over marginal SSTS.

The official forecast will remain on the higher side of the guidance during the first 36 hours…and is not too dissimilar to the HWRF model.Â  At about the time that Felicia moves into the central pacific…global models increase the wind shear significantly…which should continue the weakening process even though water temperatures gradually warm west of 140w.Â  In fact…All of the reliable intensity guidance show the system to be either a tropical depression or dissipated at the end of the period.Â  The official forecast will keep Felicia as a Tropical Cyclone through the next five days…though the strong shear could even weaken the system to a remnant low by day 5.

The hurricane remains on track and continues to move at about 305/9. There has been no change in synoptic reasoning with the global models suggesting that Felicia will turn more to west-northwest then west with time as ridging builds northeast of Hawaii.Â  Global Models are tightly clustered throughout 72 hours…and little change was made to the NHC forecast.Â  Thereafter…since Felicia is forecast to be much weaker at long-range…the official forecast will assume that the system will be steered a little south of due west in the low-level trades.Â  However…it is important not to focus on the exact forecast points at days 4 and 5 because there is considerable uncertainty at that time frame.