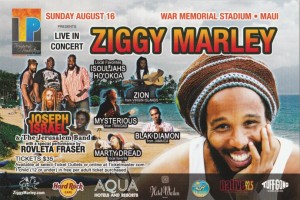 In the wake of his 2006 album Love Is My Religion, which earned his fourth Grammy Award, Ziggy Marley shares his musical love with families – his own and the extended human family. Marley’s third solo release, Family Time, is produced with old friend Don Was and will be released this May on Marley’s independent Tuff Gong Worldwide label.

Tickets are $35 for general admission and are available at select Ticket Outlets or online at Ticketmaster.com. One child (12 or under) is admitted free per adult ticket purchased.

Ticketmaster outlets on Maui are:

(Posted by Wendy Osher, ziggymarley.com contributed to this story)