Tropical Storm Felicia is expected to be near or over the Hawaiian Islands by late Monday or early Tuesday.Â  At 11 a.m. HST Sunday, August 9, 2009, Felicia was located at 525 miles east of Hilo Hawaii, and about 695 miles east Honolulu, Hawaii.Â  The storm was moving west at 14 mph, a track that was expected to continue for the next couple of days. 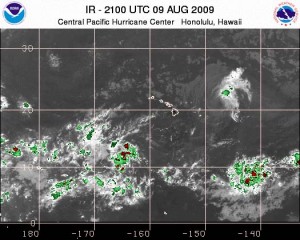 Maximum sustained winds are near 50 mph with higher gusts, and gradual weakening forecast for the next couple of days. Tropical storm force winds extend out from the center of Felicia up to 105 miles.Â  Minimum central pressure is 1002 mb or 29.59 inches.

Maui and Hawaii counties remain under a Tropical Storm Watch.Â  This includes Hawaii Island, and the islands of Maui, Molokai, Lanai and Kahoolawe.

SUMMARY OF 1100 AM HST INFORMATION:

An intermediate advisory will be issued by the central pacific hurricane center at 200 pm HST followed by the next complete advisory at 500 pm HST. 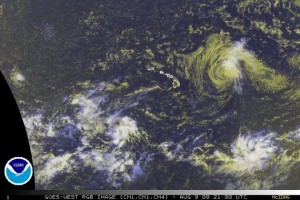 Felicia has rapidly weakened overnight…but it is far from being dead. Air force reconnaissance aircraft measured 56 kt at 700 mb within an area still convective ly active in the northeast quadrant at about 1745 utc.Â  On the next leg in that quadrant…flying at 850 mb…flight-level winds reached 65 kt…but in an area with less vigorous convection…but a dropsonde within convection measured a mean boundary layer wind of 57 kt.Â  That would roughly correspond to a surface wind estimate of about 45 kt…and that will be the advisory intensity.Â  Given the overall convective collapse of the system…we are assuming the usual reductions to the surface of the various flight-level winds are not applicable.

The advisory intensity is generally consistent with a blend of a wide variety of dvorak t and ci numbers.

Earlier this morning the forward motion took on a larger northern component…but recent goes satellite loops show Felicia is now moving just north of due west…or 280/12. This will likely continue as the reduction in system deep convection makes Felicia more susceptible to low level trade wind steering flow. Â Most of the track models take Felicia westward and over the Hawaiian Islands within the next two days…with only the gfs forecasting the center to pass more slowly to the north of the islands.Â  The official track is only a slight adjustment northward out of respect to the gfs…but is very close to the model consensus and is most in agreement with the gfdl.

The track of Felicia will continue to take it through an environment of strong westerly shear and over slowly warming ssts…which would likely preclude re-strengthening as shown by all of the intensity models…some of which show dissipation within the next couple of days.Â  However…given that convection is persisting in the northeast quadrant despite the shear…the official forecast calls for a more gradual decline to a depression while passing over Hawaii.Â  There is still a chance Felicia could reach Hawaii as a low-end tropical storm.