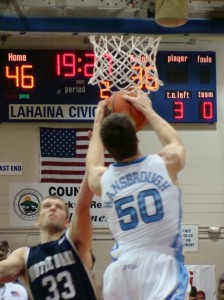 The EA SPORTS Maui Invitational is now in its 26th year and has often been referred to as the nation’s premier early-season college basketball tournament.

The event returns to the Lahaina Civic Center in West Maui during Thanksgiving week 2009 from Nov. 23-25.

Four of the seven Division I teams in the 2009 lineup participated in the 2009 NCAA Tournament, highlighted by runs to the Sweet Sixteen by Arizona and Gonzaga.

In all, 85 schools representing 21 conferences and 38 states have competed in the EA SPORTS Maui Invitational, with Maui participants having won an 55 of 71 NCAA championships, 55 of 71 national runner-up spots and comprise 214 of 284 Final Four teams.

“This year’s Tournament showcases another field of outstanding competition,” said Tournament Chairman Dave Gavitt. “We will celebrate the 26th annual Tournament with a powerhouse field. College basketball fans from around the globe can look forward to another remarkable week of basketball at its finest.”

The ESPN networks will combine once again to offer live television coverage of all 12 Tournament games.Â  For the first time, every game will be produced in high definition on ESPN HD, ESPN2 HD and ESPNU HD, with the ESPN and ESPN2 games also streaming live on ESPN360.com.

NEW FLOOD MAPS MAKE INSURANCE A REQUIREMENT FOR SOME