VIDEO: MauiNow Takes on the 2009 XTERRA in Makena

Makena Beach challenges the top triathletes from around the globe in the toughest and most scenic off-road triathlon in the world. Over 20 countries were represented at this year’s sold-out XTERRA World Championship on Sunday, October 25, 2009.

It’s any man’s race when defending champ, Ruben Ruzafa from Spain, is forced out of the competition because of a bike injury days prior. Pros compete for a piece of the $105,000 purse prize.

Competitors race for one mile of rough water swimming, traverse 20 miles on mountain bike across 3,000 feet of hot, dry outback and finish running for 7.5 miles on what’s known as the hottest part of the course along sand and lava rock.

Jade Moss takes us on the inside track and chats with the 2009 World Champions. 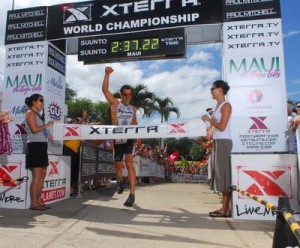 Eneko Llanos, 32, of Vitoria-Gasteiz, Spain and Julie Dibens, 34, from Bath, England (living in Boulder, Colorado) won the XTERRA World Championship and $20,000 first place prize money that goes with it at on a hot and sunny day at the Makena Beach & Golf Resort in Maui this afternoon.

Llanos finished in 2:37:22, 55 seconds ahead of Nicolas Lebrun from France, to collect his third XTERRA World Championship and first since winning back-to-back titles in 2003 and 2004.

Dibens finished with a women’s event record time of 2:56:42.Â  She is the first pro – man or woman – to win this race three years-in-a-row and joins the exclusive club of three-time winnersÂ  with Conrad Stoltz, Melanie McQuaid, and Eneko Llanos

Owner of Old Araki Store Celebrates Life as a Centenarian