An estimated 50 people will to travel from Maui to Oahu to observe events surrounding the 200th year anniversary of the unification of the Hawaiian Islands under Kamehameha the Great. 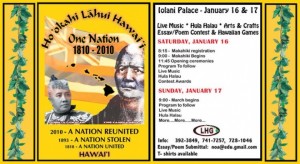 The event entitled Ho`okahi Lahui Hawai`i is organized in part by former Hana, Maui resident Henry Noa.Â  â€œItâ€™s an event uniting people under one nation,â€ Noa said of the January 16 and 17 event that will be held on the grounds of Iolani Palace on Oahu.

The event calls for heightened efforts to reunite as people under one nation, embracing the accomplishments of Kamehamehaâ€™s success even after and despite of the events of the overthrow that occurred on January 17, 1893.

Maui Kumu Hula Kaponoâ€™ai Molitau and his halau Na Hanona Kulike â€˜O Piâ€™ilani will assist with the opening protocol to mark the start of the event.Â  Saturdayâ€™s events also include Makahiki games, music, hula and awards, as well as a program honoring Kamehameha the Great and succeeding monarchs of Hawaii.

While events on Saturday, are more celebratory in nature, day two is more reflective, marking the 117th anniversary of the overthrow of the Hawaiian Kingdom.Â  Sundayâ€™s program begins with a march at 9 a.m. from Thomas Square to Iolani Palace. Ceremonies will be held in front of Washington Place, at Queen Lili`uokalaniâ€™s statue, King Lunaliloâ€™s site at Kawaiahao Church, with final ho`okupu and ceremony at King Kamehamehaâ€™s statue.

Noa said the group is also planning a bicentennial event on Maui that is tentatively set for late April or early May.