Seniors and disabled residents showed up in force at the county building Tuesday morning (April 20, 2010) to speak out against proposed cuts to a portion of funding for the MEO bus system.  Maui Economic Opportunity currently provides transportation services to the elderly, disabled and under served groups.

“No wheels, no meals,” said Kenneth Keaunui, a member of the Lahaina Senior Center.  “We go to the senior center to have our meals, so we need the transportation of the MEO bus,” he said.

Lahaina resident May Fujiwara, who used to MEO bus to attend the budget meeting said, “As you can see by the great number of seniors present today, how concerned we are in the cut in funding for the services provided by MEO, especially in the form of transportation.” Fujiwara spoke on behalf of the Planning and Coordinating Council, which consists of 53 senior organizations throughout Maui county, with a membership of approximately 5,000.

“The testimony this morning from the many people who showed up to testify was really heartwarming and I think very clear,” said Council Member Gladys Baisa, who previously served as the head of MEO before taking public office.

“The message that I got which frankly I already knew, was that the difference between a public bus service and the MEO service (and it was mentioned over and over), is really the compassionate care and the extra mile,” said Baisa.

June Kaaiue of the Lahaina Honolula Seniors group said she depends on the service daily.  She said it’s especially important for people in wheelchairs, the disabled and those on dialysis.  “A lot of us seniors cannot even go to the bus stop,” she said.

“Without MEO, most of us seniors cannot even move around going from one place to another,” said Kaaihue.

MEO Executive director Sandy Baz said the proposed cuts include a 12 percent funding reduction, that translates to a $740,000 cut.

“The don’t want to lose their access to community resources, being able to go out and be active, be social, make sure that they have the opportunity to remain independent—it’s a very important factor,” said Baz.  “Without transportation it’s hard for them to do that.”

“There is a lot of testimony at the county council budget hearings regarding MEO’s transportation and the difference between MEO and the Maui Bus, and the effects that it would have on them,” said Baz.

In addition to the cuts, there’s also a provision in the budget that calls for a $1 per trip fare for customers who utilize the MEO bus.

“Due to the proposed dollar per boarding, the lives of our seniors as well as those of our young people will be greatly impacted,” said Fujiwara.  “Seniors will have to make drastic changes:  fewer doctor appointments, fewer trips to the grocery store, fewer visitations of family and friends at Hale Makua, and fewer educational and recreational activities in which we can participate,” she said. 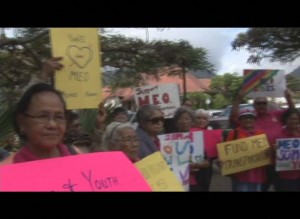 Seniors and disabled residents showed up in force at the county building Tuesday morning to speak out against proposed cuts to a portion of funding for the MEO bus system. Photo by Wendy Osher.

“It’s the transfer of the Ala Hou service to the public bus transit provider that is causing the most angst,” said Baisa.  “You know in 1970 when the bus service began, that was the whole idea—that MEO would go and specialize transportation, not in mass transit.  And so when the public bus system was born in 2006, there was an understanding that was singed by then Mayor Alan Arakawa and myself, that the public transit would do mass transit, and MEO would continue to do specialized transportation service,” said Baisa.

“And we seem to be veering away from that and going in another direction.  And I believe that is the cause for all of the upset in the community,” she said.

In her testimony before the council on Tuesday, Fujiwara said, “Please consider the meager retirement pay and small social security checks our seniors receive.  We don’t want to have to decide between buying groceries or filling our prescriptions,” said Fujiwara.

The council’s budget and finance committee continues to finalize details of the FY2011 budget.  A decision on MEO’s request for restoration of funds is due by the end of next week because of budgetary timelines.