Maui becomes the final county in the state to pass a cell phone ban while driving.  The item passed second and final reading today with seven council members in favor and two members (Michael Victorino and Bill Medeiros) excused. 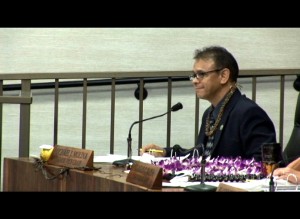 Maui’s bill differs from other counties in that it also specifically restricts drivers under the age of 18 and those with permits from using electronic devices while driving.

Councilman Michael Molina who introduced an amendment to the bill to include the restriction said the bill is not a perfect one, but is a start.  He said it also reminds us that driving is a privilege and not a right.

If he mayor signs the bill, the earliest that it would take effect, would be two weeks from today on July 2nd.

September USC vs Hawaii game will resume as planned