A political rivalry on Maui is off to a touchy start.  The race for Mayor is officially one candidate shy of a dozen, and eight weeks short of being narrowed to two.  But recent rumblings raised on the campaign trail have cast a shadow of negativity in the competition for Mayor.

An on-air comment made by former Maui Mayor Alan Arakawa, sparked an off-air debate from backers of political opponent and incumbent Mayor Charmaine Tavares in the days leading up to Tuesday’s filing deadline.  The two face off against each other and nine other candidates in the crowded race for the county’s top job in a field that was finalized yesterday.

The recent feud that has now surfaced in various on-line forums, stems from a discussion during Arakawa’s live one-hour paid radio program that aired Thursday, July 15, 2010 on a locally produced AM station.  In a partial transcript provided to MauiNOW.com and Pacific Radio Group, Arakawa criticized the restricted access to Maui’s elected officials in the time that has transpired since his term as Mayor from 2002-2006.

According to the transcript, Arakawa said, “You used to be able to walk all the way up to my office, talk to my secretary, and if I didn’t have an appointment, you come in and say hello.”

“There are sealed doors there now,” he said.  “You can’t get into any of the offices without security buzzing you in,” said Arakawa in the transcript. 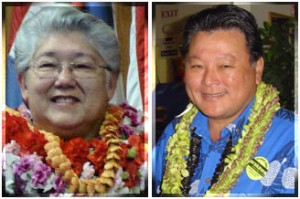 But the comment that is coming under fire is a specific reference made to action that could be taken by someone intending harm to the Mayor.

“I think I made a comment along the line of: any idiot would know that you can put security in the county building,” said Arakawa, but he questioned the sense when “outside there is virtually no security.”

“For all intensive purposes, for all the money being spent, the request for renovation funding is ridiculous, and the purpose for what the conversation was intended,” said Arakawa.

The comment in question drew a scathing response from the Mayor’s Communications Director, Mahina Martin who submitted a Viewpoint column for publication.  “Casually speaking of the ease of physically harming or potentially fatally shooting an elected official is absolutely shocking and careless,” she said.

When asked if there would be a retraction, Arakawa said the concerns raised are a way of diverting attention from the real issue which he said was extravagant spending during an economic downturn and a lack of open government relations.

Any insinuation “that we are threatening the mayor has no merit,” said Arakawa.

But Martin disagreed saying, “There are profoundly many ways to disagree and an immeasurable number of ways to make a point when speaking,” said Martin in the column.  “Regardless of what issue Mr. Arakawa was criticizing at the moment—it pales beyond comparison to planting an idea in the mind of someone listening…” she said.

The two top vote-getters during the September 18th Primary Election advance to the General Election on November 2nd.