The Kehalani fire that started just before midnight, remains at 60 acres and no injuries are reported.  There was damage reported to waterlines connected to the ‘Iao Water Treatment Facility, which has been shut down while lines are repaired.  The shutdown does not currently affect water customers in the area. 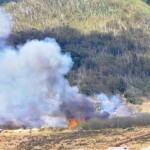 Photo of Friday 8/6/10 flare up courtesy County of Maui. 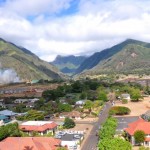 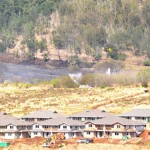 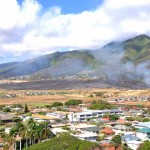 The fire threat impacted the several hundred residents and homes in the area, including numerous housing units still under construction.  The larger urban area of Wailuku, within a mile of the fire, includes several schools, churches, government offices, and the county building.

“We are grateful for the assistance of Goodfellow Bros., Rojac Trucking and the Department of Public Works for their help fighting this fire, which could have spelled disaster for so many,” said Mayor Charmaine Tavares.  “I’d also like to thank the American Red Cross personnel who opened a shelter for residents in the early morning hours, and residents for their cooperation during the evacuations.  Our police officers were extremely helpful in providing traffic control measures and coordinating evacuation efforts to get residents to safe ground, and I would like to thank our fire fighters for their skill and tireless dedication in protecting so many homes. It’s never easy to face the very real threat of fire in such a dense urban area, and our County personnel and community partners did an incredible job of keeping our community safe,” said Tavares.

Current estimated size of the Kehalani Fire is 60 acres; it was declared under control at 6:42 a.m. this morning. Fire crews remain on scene and have been mopping up hot spots and responding to a few flareups.

No injuries or damage to structures have been reported. Officials estimate that the fire came within 50 feet of the nearest structure, and within a few yards of a Department of Water Supply pressure break tank, a critical component that controls the flow of water into the nearby Wailuku Water Treatment Facility.

Responding to the fire this morning are three engine companies, two mini-pumper trucks and three water tanker trucks, assisted by Air One conducting helicopter water drops.  The cause of the fire is still under investigation.

A large fire that forced the evacuation of residents in Wailuku overnight remains active this morning, but was not posing an immediate threat to life or property at last report.  The fire broke out just before midnight just above the Kehalani subdivision in Wailuku.

“Shortly after 1 a.m., Maui Police went door-to-door and through the neighborhoods and asked residents to leave the area and evacuate for their safety,” said County Communications Director Mahina Martin.

The Red Cross opened an emergency shelter at the War Memorial Gym in Wailuku at 2:45 a.m., but were able to close the facility when the all-clear was issued at about 3:15 a.m.

“We really appreciate American Red Cross opening up an emergency shelter for evacuees.  Fortunately, it was just for a few hours and folks were able to return home once the all-clear was received,” said Martin.

Crews from the Maui Fire Department are conducting an aerial recognizance this morning to determine the extent of the fire.

“That aerial survey will tell us this morning the extent and damage.  We are very lucky that there were no injuries and no homes or structures were burned,” said Martin.

Martin said the fire burned brush in an area known as the Old ‘Iao Subdivision and came close to the newer side of the Kehalani (subdivision).

“It was just really difficult for firefighters to know in the dark.  And even though we had almost 50 firefighters on scene, they pretty much had their hands full throughout the night,” said Martin.

Conditions this morning were described as favorable with light winds, however residents who suffer from respiratory conditions were being advised to take precautions because of the lingering smoke.

Residents of Wailuku returned to their homes early this morning after being evacuated overnight.  A large fire was reported shortly before midnight in the Kehalani area of Wailuku on Maui.  48 firefighters battled the blaze overnight—there were more than 50 fire fighting personnel on scene at last report.  They were assisted by eight fire engines, five water tankers, and a private water tanker provided by Rojac Trucking Co.  The fire was not yet contained at last report, but residents were allowed to return home.  The evacuation included residents at the Iliahi Townhomes, The Ohia at Kehalani and The Villas.

Iao Valley Rd at S. Alu Road was closed for about 2 hours overnight to accommodate firefighting operations.  All roads in the area were reopened at around 3 a.m.

A Red Cross shelter opened briefly at the War Memorial Gym before being closed about a half hour later when the all clear was issued.  County Communications Director Mahina Martin said the size of the fire and assessment of damaged will be made during an aerial recognizance at daylight today.

Residents of the area tell us that smoke remained heavy early this morning and could pose a risk for those with respiratory issues.  The cause of the fire remains under investigation.  No damages or injuries were reported.

Maui Police and Fire officials are giving the all clear for residents to return to their homes after being evacuated from the Kehalani area of Wailuku on Maui early this morning.  Crews remain on scene, however, Maui County Communications Director Mahina Martin tells us there is no immediate threat to residential homes in the area.  An aerial recognizance will be done at daylight to determine the extent of the fire.  Through the night 8 fire engines were assisted by 5 water tankers including a tanker provided by Rojac Trucking Co. 48 firefighters battled the brush fire that is not yet contained.  All roads are now open and the Red Cross shelter has been closed.  The cause of the fire remains under investigation.

Police and Fire remain on scene, battling a fire that started late Thursday night in the Kehalani area of Wailuku.  All roads are now open.  Iao Valley Rd. was closed earlier this evening because of the incident.  The Red Cross Shelter at War Memorial Gym opened at 2:45 a.m. and is accommodating residents displaced by evacuations and heavy smoke.

The American Red Cross will be opening an emergency shelter for residents impacted by the fire at the Kehalani Subdivision. The shelter is expected to open at 2:45 a.m. and is located at the War Memorial Gym in Wailuku.

Multiple fire crews are on scene battling a fire that was first reported at 11:49 p.m. Thursday evening.  Maui Police have evacuated nearby homes as a precautionary measure. Residences on Makahou Road and Lunakia Street have been evacuated. In addition, residences located in the following developments have been evacuated: Iliahi Townhomes, The Ohia at Kehalani, and The

Villas. The American Red Cross has begun mobilizing to set up shelters for evacuated residents.  There are no reports of structures damaged at this time and no injuries are reported.  Please keep it tuned for further updates as they become available.

Maui firefighters are currently battling a large blaze located in the Kehalani Mauka subdivision in Wailuku on Maui.  The fire has forced the evacuation of residents in the area and the county is in the process of setting up Red Cross Shelters to accommodate those that are displaced.

County officials tell us the fire is located in the Kehalani Mauka subdivision in Wailuku–that’s below Wailuku Heights, but mauka of the Highway.  Maui Police have closed Iao Valley Rd at South Alu Rd because of the incident.

We will update you with information as it becomes available. 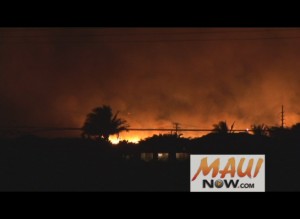 Residents from the Kehalani area of Wailuku on Maui were allowed to return to thier homes shortly after 3 a.m. after being evacuated overnight because of a large fire. Photo by Wendy Osher.

*** If you enjoyed this post, you may also like our story on the July 2010 response to a fire at Maui High School.