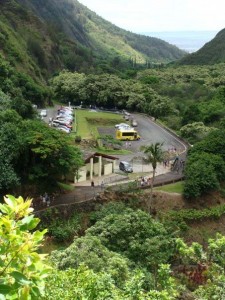 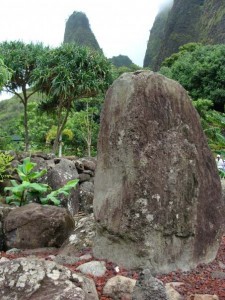 Iao Valley is one of Maui's most visited destinations. The state is implementing a new non-resident parking fee to help maintain the facility into the future. Photo by Wendy Osher.

Currently, an entry fee is charged at Diamond Head State Monument and at Nu’uanu Pali State Wayside Park.  The Nu’uanu non-resident fee began in March.  State officials say they have already generated $55,466.71 in parking revenues between March 5 and Oct. 14, 2010, from fees charged at the Nu‘uanu Pali Lookout location.

Other parks identified for future implementation of a non-resident entry or parking fee include, ‘Akaka Falls and Hapuna on Hawai‘i Island; Ha‘ena and Koke‘e/Waimea on Kaua‘i; and Makena on Maui.  Prior to implementation of a non-resident fee collection process, the Division of State Parks plans to host a community meeting in each area with the public and the commercial tour industry.

“The revenue generated from the parking fees will go toward the overall operation and maintenance of state recreational facilities such as parks, small boat harbors and forest trails,” said Laura H. Thielen, chairperson for the state Department of Land and Natural Resources.

“Through implementation of small entry or parking fees for non-resident visitors to high-traffic parks, we can apply revenues to needed repairs and maintenance to help the park system become more self-sufficient,” said Thielen.

The implementation of the fee comes following public information meetings held on Island.  The Division of State Parks staff held a public information meeting on Maui on July 1 to explain that the fees would only affect out-of-state visitors and commercial tour companies.  The State Office of Tourism Liaison also coordinated a meeting with State Parks staff and the commercial ground transportation tour companies on Maui.

In fall 2009, the Hawai‘i Business Roundtable asked residents their opinion on specific measures to either raise taxes or reduce services at state facilities.  State officials say the only proposal that residents favored was user-based.  Charging entrance or parking fees to State Parks but exempting residents was the most popular option, favored by a majority of 58 percent.  The Board of Land and Natural Resources authorized the Division of State Parks to set either parking fees or entry fees (but not both at the same location) at specific state park locations across the state.  The Parks division identified parks with high volume non-resident traffic to implement either parking or entry fees.

*** If you enjoyed this post, you may also like our story on Maui gets repeat honors as Best Island in the World. 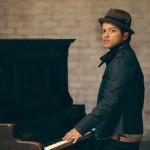 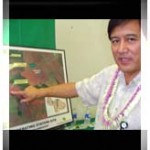