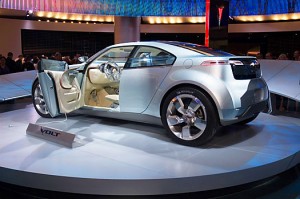 On one day, both Motor Trend Magazine and Automobile Magazine named the Chevy Volt car of the year, legitimizing the revolutionary electric and gasoline combination.

In Motor Trend magazine’s testing, they drove the Chevy Volt some 300 miles, charging it every night just as an ordinary consumer driver would, and put it through a combination of highway and city driving.  At the end, the Chevy Volt had eaten 58.6 kilowatt-hours of electricity ($5.03 of electricity, based on US averages) and 2.36 gallons of gas.  Using the Environmental Protection Agency’s MPGE, or miles per gallon equivalent, that comes out to 72.9 miles per gallon.  Impressive!

While a brief controversy emerged after the full details of the engine was made public following a US Patent approval, all critics now appear to be silenced.  Early reviews from the Los Angelos Auto Show suggest the new car may actually be car of the decade, not just car of the year.  The new Volt manages to blend electricity and gasoline perfectly, with no drop in performance when the gasoline engine moves to electricity or vice-verse.  Instead, under both gas and electric power, the car accelerates just like any other V6 engined car.

The new Volt is quite the success story.  The project began at the onset of General Motors’ worst financial problems in 2006, and was able to survive a bailout, bankruptcy, and a new corporate relaunch of General Motors on the New York Stock Exchange.

The Volt will go on sale in December and will make its way across all 50 US states in 2011.  Several other electric vehicles launched by competing firms will also enter the market in 2011, including the much anticipated Nissan Leaf.  Rival US automaker Ford will release an electric version of the Ford Focus in 12 markets by the end of 2011.

The Chevy Volt has a total range of 300 miles on a full charge plus one full tank of gas.  The car will feature both 110 and 220 volt consumer recharging stations, both designed to completely recharge the Volt’s batteries in less than 12 hours.  The car will launch at a $41,000 price point, however plenty of local, state and federal subsidies and tax credits drive the actual price into the lower $30,000 levels.