Governor-Elect Neil Abercrombie appointed five Cabinet members in his first announcement on leadership positions yesterday.  Department directors will have to be confirmed by the State Senate.

“We are forming a team of strong leaders who are the right people to help move Hawaii out of these difficult times,” said Governor-Elect Abercrombie. “These are talented, creative individuals who have pledged to work together to fulfill our vision of A New Day in Hawaii.”

WILLIAM J. AILA JR. (DLNR) The appointments include longtime Waianae Boat Harbor master, William J. Aila Jr. as the chair of the Department of Land and Natural Resources. Aila is a Hawaiian advocate who ran unsuccessfully for governor in 2006.  Aila, 52, has worked for the state Department of Land and Natural Resources for more than 23 years in the Division of Boating and Ocean Recreation. His responsibilities include managing, operating and maintaining 31 acres of fast and submerged lands. Aila has served on national, state and community advisory groups for more than 20 years. As president of Mohala I Ka Wai, Aila worked with the state Division of Forestry and Wildlife, U.S. Army, community groups and private landowners to create the Waianae Mountains Watershed Partnership, an organization dedicated to protecting Hawaii’s forest, streams and drinking water. Aila, a Waianae High School graduate, received his Bachelor’s degree in General Tropical Agriculture from the University of Hawaii at Manoa.

RICHARD LIM (DBEDT) Also making the Cabinet list is Richard Lim who was selected at the Director of the Department of Business, Economic Development and Tourism.  Lim has over 30 years of experience in banking and financial services. Lim, 59, is a co-founder of Sennet Capital, a Hawaii-based merchant banking firm that provides assistance to Hawaii companies with respect to mergers and acquisitions, capital sourcing and strategic planning. Prior to founding Sennet Capital, he was the president and chief operating officer of City Bank until its merger with Central Pacific Bank in 2004. Lim came to City Bank via International Holding Capital Corporation (the parent of International Savings and Loan) where he was president and chief operating officer from 1987 to 1994. Lim has been an active member of the community and currently serves on the boards of the Hawaii Institute for Public Affairs, the Pacific Asian Affairs Council, the Hawaii Technology Development Venture, the Korean American Foundation and the board of governors of Chaminade University. Earlier in his career, he served on a number of boards and organizations, including the Hawaii Strategic Development Corporation, the National Energy Laboratory of Hawaii, the Community Based Economic Development board, HiBeam, UH Connections and Enterprise Honolulu. Lim holds degrees from Santa Clara University and Chaminade University.

JODIE MAESAKA-HIRATA (Public Safety) Jodie Maesaka-Hirata was appointed as the Director of the Department of Public Safety. Maesaka-Hirata, an 18-year veteran of the state Department of Public Safety, is the acting warden of Waiawa Correctional Facility. In August 2008, with the support of the surrounding community, Maesaka-Hirata launched an offender re-entry program that successfully reintegrated offenders by providing them job experience while they were still incarcerated. Maesaka-Hirata first began her work in public service at Halawa Correctional Facility in 1989 as a social worker. Maesaka-Hirata, 44, a Pearl City High School graduate, received her Bachelor’s degree in social work from UH-Manoa and her Master’s degree in criminal justice administrator from Chaminade University.

ALAPAKI NAHALE-A (DHHL Director), Alapaki Nahale-a was named Director of the Department of Hawaiian Homelands.  The Hilo resident is the Executive Director of the Hawaii Charter Schools Network, which provides support for Hawaii’s charter schools and the charter school movement. Previously, he was the director of a Native Hawaiian community driven public charter school Ka Umeke Kaeo in Hilo for six years.  Nahale-a, 42, is also a Department of Hawaiian Home Lands Commissioner, a Hawaii County Charter Commissioner, and a board member for the Kuikahi Mediation Center. In years prior, Nahale-a held a series of community development positions with Hawaii Community College, the Council for Native Hawaiian Advancement, and the Rural Community Assistance Corporation. He served the Hawaii County Council for five years as a legislative auditor assistant and fiscal/program review auditor.  Nahale-a graduated from Kamehameha Schools in 1986 and then earned his Bachelor’s degree in political science from the University of Pennsylvania.

BOBBY HALL (DHHL Deputy) Bobby Hall was named Deputy Director for the Department of Hawaiian Homelands.  He has more than 30 years of service with the State of Hawaii, including 15 years at the Department of Hawaiian Home Lands. Hall, 57, began working at the state as a clerk at DHHL. His expertise is in affordable housing, development, construction, community relations and financing. His accomplishments include developing the initial concept and scope for DHHL’s Home Ownership Assistance Program (HOAP), which assists Native Hawaiian families to become successful homeowners; and forming the first public housing Neighborhood Watch Program at Mayor Wright homes, which paved the way for other programs like Weed and Seed, that won him a national award in 1989 for drug prevention from U.S. Housing and Urban Development. A graduate of Saint Louis High School, Hall studied Hawaiian Studies and liberal arts at UH-Manoa.

*** If you enjoyed this post, you may also find our story on Maui Mayor-Elect Arakawa’s Finance Pick interesting too. 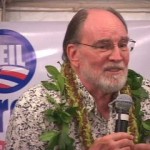