Get Enchanted by Three Magic Words 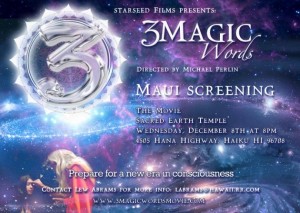 If three words could change your life completely, what might they be?

This is the question asked and answered by the movie, “Three Magic Words,” a groundbreaking independent film which will be screened in Maui this Wednesday, December 8th, at 8 pm.

The film will be presented by its producers, Michael Perlin and Maura Hoffaman, at the breathtakingly beautiful Sacred Earth Temple located at 4505 Hana Highway in Haiku.

You can watch the trailer for the film at http://www.youtube.com/watch?v=ToynNgMBJgY&feature=share 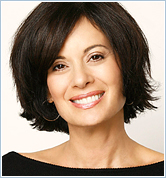 Inspired by U.S. Anderson’s book, also dubbed “Three Magic Words,” the film unites concepts of quantum physics, philosophy, geometry and archeology with breakthrough insights on the nature of consciousness as it applies to everyday life.

It teaches us how to take our daily existence to the next level of potentiality, using new tools and insights that have been shrouded with misinformation and rhetoric for thousands of years.

To learn more about the vision, the film, and the interviewees, go to www.threemagicwordsmovie.com

Michael Perlin, the film’s producer and founding visionary, explained, “I began working on the movie in 2007. I was searching for something that was so simple and so easy to understand and tied together all the spiritual teachings from all cultures.”

What resulted was a journey to create the medicine that would guide his own path, and help others in the process.

“My hope is that people can take away from this film a way to live a better, happier life. To understand who they are and why they are here. I always say that religion divides and spirituality unites. This movie is about self-realization and using the power to change yourself and the world.” 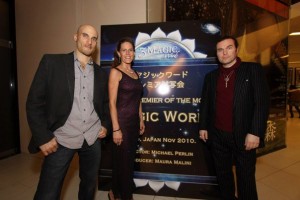 Maura Hoffman, the movie’s co-producer, was responsible for securing interviews with the world’s most sought after authorities on new age thought and metaphysics.

“We were blessed and divinely guided with our incredible guests. Some were friends, some were teachers. When we shared our vision they were all enthusiastic to contribute!” she effused.

To learn what all the excitement is about, join them for a night of illumination, education, and awakening.

The host site of the event, Sacred Earth Temple, is a structure of architectural wonder, on a cliff overlooking the ocean. The vaulted dome ceiling of the temple is studded with a massive crystal inlaid in a lotus flower.

It is the perfect place to feel the magic. And learn what those magic words are, and how to apply them to your life.

If you have suggestions for entertainment events that you would like to see featured on Mauinow.com please write to [email protected] Aloha! 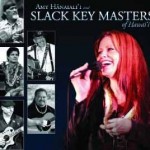 *pOp* in to the Holiday Pops concert!