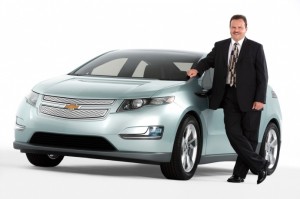 While car shoppers [1] are used to miles per gallon stickers emblazoned on the rear passenger window of new automobiles, they may notice a difference with the Chevy Volt: three MPG ratings.

The Environmental Protection Agency has scored the Volt at 37, 60, and 93 miles per gallon equivalent depending on the driving habits of its final user.  The Volt uses a system not all too different from modern hybrid cars, allowing drivers to travel short distances entirely on electricity before the gasoline engine kicks in as battery power winds down.

To achieve 93 miles per gallon equivalent, drivers will have to be using battery power alone, making this rating very much akin to normal “city mpg” ratings.  The 37 MPG rating was calculated on all gasoline performance, and during periods when the gasoline engine is driving power to the electric system, generating energy for future all electric or mixed power consumption.  The 37 miles per gallon rating is most realistically found in high speed driving after a bout of city driving leaves the batteries exhausted.

As for the 60 miles per gallon rating, it will be found below the other ratings as the car’s comparison to other cars, working as an effective “average” of long term driving efficiency.  As for range, Chevrolet claims a total 400 mile range on a full tank of gas and battery, but the EPA will report only its electric range at 35 miles.

For Chevy, the ratings may have been a bit of a bust with the company currently engaged in an efficiency war with competitor Nissan whose own Leaf recently earned the 99 miles per gallon tag.  The Nissan Leaf, according to the EPA, has a range of 73 miles.  Nissan claims its car has more all-electric range than the Volt, but General Motors has countered, noting that the Volt, unlike the Leaf, can also run on gasoline.

General Motors has high hopes for a full line of electric vehicles.  The company recently announced a hiring spree of one thousand US based engineers, as well as plans to export the Volt outside US borders starting in late 2012.

The Volt will debut first in California, New York, Michigan, Texas and Washington D.C. in 2011 before going national in 2012.  Indications are that Europe and Australia would be the first export destinations.  Ten thousand new Volts will be manufactured in 2011, followed by 45,000 in 2012.

Reports have indicated the company would prefer to produce more Volts for an eager line of customers, but bottlenecks in battery supply lines are keeping total production temporarily grounded.  LG, better known for consumer products like HDTVs and cell phones is responsible for the Volt’s lithium ion batteries.