The University of Hawaii was rewarded for a 10-3 record, finishing in a three-way tie for the conference championship and a No. 24 national ranking in the all-WAC balloting. 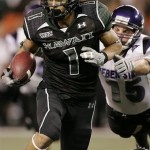 Although he ranks first nationally in passing yardage, Hawaii’s Bryant Moniz was a second-team pick behind another pair of exceptional quarterbacks. Boise State’s Kellen Moore and Nevada’s Colin Kaepernick shared offensive player of the year honors.

But the biggest slight came in the Coach of the Year voting. Although guiding his team to unexpected success after being picked to finish seventh in pre-season polls, Greg McMackin was snubbed.

The honor instead was accorded to Nevada’s Chris Ault, although his team was projected to finish second, behind Boise State, in the pre-season polls.

HAWAII BOWL: When Hawaii and Tulsa square off on Christmas Eve at Aloha Stadium, fans should be treated to plenty of fireworks. That’s because this year’s Hawaii Bowl matchup will feature two of the most productive offenses in the NCAA, combining for nearly 78 points per game.

Hawaii has the nation’s top passing offense with an average of nearly 385 yards per game while ranking 10th in total offense at 487.8 and 12th in scoring at 38.3. That explosive unit and a dramatically improved defensive group enabled UH to win nine of its last 10 outings.

Hawaii’s prowess was on display in Saturday’s 59-23 rout of over-matched Nevada-Las Vegas as Moniz threw for four touchdowns and ran for two more. Moniz is tied for the national lead in touchdown passes with 36.

His top two targets – Greg Salas and Kealoha Pilares – are among the leading receivers in the country. Salas is first in reception yardage and second in total catches. Pilares is third in TD catches. Green is the national leader in yard per carry with 8.78. 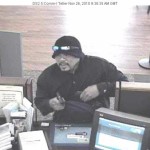