In Pre and Post-Production, US Government is Electric Vehicle’s Biggest Backer 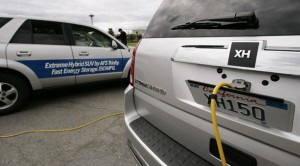 In documents obtained by Freedom of Information Act for Bloomberg, it was found that the US Government has made up nearly 25% of the entire market for hybrid automobiles in the last two years.

The fleet of federal cars operated by the General Services Administration expanded by more than 14,000 hybrid automobiles in the fiscal years of 2009 and 2010.  Those purchases amount to more than ten percent of total car purchases by the GSA in that time.  Prior to the purchases, hybrid automobiles accounted for only 1% of the total fleet size.

As the economy slowed, and so too did the sales of hybrid automobiles.  More than $300 million was allotted to the GSA to purchase some 3,100 hybrid vehicles as part of the American Reinvestment Act.  Later, the GSA purchased an additional 5,600 hybrids with proceeds mostly derived from the sale of portions of the aging federal fleet.

The economy has been blamed, at least in part, for the slow pace of adoption for hybrid vehicles.  Some analysts contend that those who were in the market for a hybrid vehicle prior to government purchases may be waiting for further developments in full electric vehicles.  By 2012, nearly every large automotive manufacturer will have its own full-electric automobile.

An Industry in Infancy

With the help of economies of scale, Government officials hope that General Motors and Ford, two companies currently making hybrid automobiles in the United States, can drive down costs to a point at which they can compete directly with gas powered cars.

New car shoppers are flocking to a number of new, gas powered economy vehicles with lower sticker prices than hybrid autos.  The GSA spent anywhere from $23,000 to $47,000 for new fleet vehicles.  To compare, the new Ford Fiesta starts at $13,320 and offers 29 miles per gallon in the city, and 40 on the highway.

Even as consumers tighten their purse strings and pocketbooks, the White House has set a goal to see more than one million plug-in cars on American roads by 2015.  To reach that goal, early adopters will receive a tax credit of up to $7,500 depending on the capacity of on-board batteries.