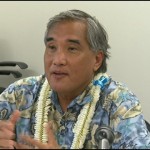 Palafox is reportedly involved in a criminal investigation by state Attorney General David Louie into medical reimbursement fraud, according to a report from HawaiiNewsNow.

A statement from the governor’s office Wednesday said Palafox asked to withdraw his nomination for health director and Abercrombie accepted.

The governor will make a new appointment for the health director as soon as possible.

Palafox was chairman of the Department of Family Practice and Community Health at the University of Hawaii John A. Burns Schools of Medicine before being appointed state health director. He has also been on the active medical staff at Wahiawa General Hospital.