Cries for Kahoolawe Surface in the Senate

Members of the Protect Kaho’olawe ‘Ohana are speaking out against a bill introduced in the state senate that seeks a reduction in the number of members on the Kaho’olawe Island Reserve Commission.

The above image from the Protect Kaho'olawe 'Ohana is being used in social media to raise awareness about the pending legislation.

SB609 would reduce the number of members on the KIRC from seven to five, effectively eliminating the current requirement that two members be selected from a list provided by the Protect Kaho’olawe ‘Ohana.

Under the bill, the KIRC would be made up of: one member from the Office of Hawaiian Affairs, one county official appointed by the governor from a list provided by the Mayor of Maui County, and the chairperson for the Board of Land and Natural Resources. The remaining two members would be selected by the governor in consultation with native Hawaiian organizations.

The bill would also require a four year wait before members could be reappointed to the commission.

The Protect Kaho’olawe ‘Ohana is a grassroots organization that has been at the forefront efforts to stop bombing on the island and provide stewardship of the island’s natural and cultural resources. Since 1980, the organization has led cultural access trips to Kaho’olawe for thousands of students, community organizations and volunteers.

The bill is scheduled for a hearing this Saturday, February 12, 2011 at 10 a.m. at the State Capitol Conference Room 225 before the Senate committees on Hawaiian Affairs and Water, Land and Housing. Testimony can be submitted online at the following link: http://www.capitol.hawaii.gov/emailtestimony/?measure=SB609. 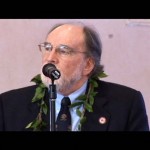 First Hawaiian Bank President Nominated to Board of Education

Maui's Young and Pablo get nod from WAM