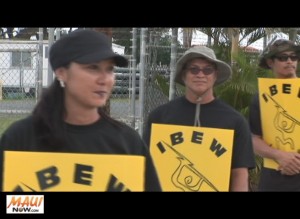 Some 200 union members from Maui Electric Company walked off the job on Friday. They are the first in the state to vote on a tentative contract finalized by IBEW Local 1260 officials and executives with parent company Hawaiian Electric. Photo by Wendy Osher.

Ratification voting is set for today from some 200 union employees at Maui Electric Company who walked off the job on Friday. Big Island workers at Hawaiian Electric Light Industries, and Oahu employees at Hawaiian Electric Company will vote Thursday and Friday respectively. The contract for Electrical workers expired on October 31st and was extended three months. A tentative agreement was reached late Monday.

There have been two outages reported on Maui since the strike began.  The first affected an estimated 600 customers Sunday night in the Old Wailuku Heights and Iao Valley subdivisions when a tree fell on power lines.  A separate outage affected an estimated 670 customers in Kaanapali early yesterday morning.  Power in both incidents was restored by non-union employees.

The ratification vote schedule is as follows: 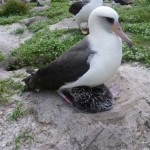