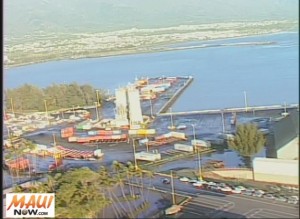 Maui Mayor Alan Arakawa along with his directors from Public Works,
Wastewater Management and the Department of Water Supply went up in
a helicopter at first light on Friday morning to assess the impacts of 6-foot tsunami waves that flooded many inland areas and washed debris ashore on Maui.

The aerial reconnaissance allowed directors, who are all engineers, to quickly evaluate which areas need repairs and/or cleanup, and allowed crews on the ground to begin work in restoring order to flooded and damaged areas.

The tsunami waves reached furthest inland in Kahului Maui, where the surge pushed debris and flood waters up Puunene Avenue all the way to the Wallgreens store at the East Kamehameha Avenue intersection.

Impacts from the force of the wave were most visible along Kahului Harbor where where concrete jersey barriers were pushed into the northbound lanes of the roadway, along with trees, driftwood, vegetation and mud.

The receding of water continued even after the Warning was dropped to an Advisory at 7:30 a.m., and subsequently Canceled at 11:26 a.m. Friday. We received reports throughout the night of water receding anywhere from 100 to 500 feet at different coastal areas of Maui. At Kahului Harbor, the concrete pilings at the pier were exposed along with the seafloor at the boat ramp area closest to Kahului Beach Road.

At Maui’s Ma’alaea Harbor, at least four boats sustained significant damage. One of the tsunami surges advanced past the break-wall to the floor of Buzz’s Wharf restaurant, flooding the parking lot area and surrounding dock space. Spectators say at one point about three-fourths of the water was sucked dry from Ma’alaea Harbor.

Further to the South heavy flooding was reported along multiple spots on South Kihei Road. Flood waters occurred at intersections with Kenolio Road by Suda Store, Kaonoulu near the Whale Santuary, and Lipoa Street near St. Theresa’s Church. Water receded significantly offshore at the Ko’ie’ie Fishphond in North Kihei and at Cove Park further to the south. The withdrawal of the ocean also sucked water from the Kihei Boat Ramp until it was bone dry according to our reports from Mayor Alan Arakawa.

To the West, the Honoapiilani Highway was closed for more than nine hours as low-lying portions became inundated with water. Surges washed over the highway north of mile marker 14 near Ukumehame. Further to the north, at Launiupoko Beach Park, heavy flooding was reported as well as water receding an estimated 100 yards off shore. Approaching Lahaina Town, we had reports damage to boats at Lahaina Harbor. Nearby, on Front street, we received reports of water reaching up to 9-feet, surging up the stairs of the Cheeseburger in Paradise restaurant.

This morning cleanup continued to remove standing water and debris from parks and roadways. County officials thanked the public for their cooperation during the event.

(***Special thanks to the County of Maui and Blue Hawaiian Helicopters for aerial footage from recognizance efforts.) 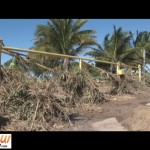