The U.S. Embassy in Tokyo, Japan began making potassium iodide available to U.S. Government personnel and family members.  The precaution comes in the wake of ongoing nuclear concerns at the Fukushima Dai-ichi nuclear power plant that was damaged in the earthquake and tsunami earlier this month.

The potassium iodide or KI, was made available to those residing in areas for which voluntary departure was already authorized.  Recipients of the medicine have been advised to only consume it after specific instructions have been obtained from the U.S. government.

The Embassy released information saying there is no indication that it will become advisable to take KI.  The agency says the KI was provided out of an abundance of caution to be used only upon direction, if a change in circumstances were to warrant it.

According to the U.S. Embassy, sheltering in place or safely departing affected areas remain the most effective means of protection in the event of a radiological release. 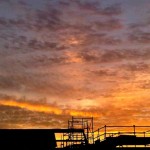