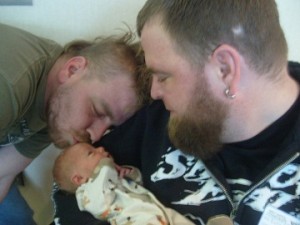 Baby gets warm welcome from Dad and Uncle.

The 41st Annual March for Babies will be held April 16th starting at 7 am at War Memorial Gym.    The annual event supports the March of Dimes efforts to decrease the incidence of prematurity, birth defects and infant mortality through national and local programming and research.

On an average week in Hawai`i 44 babies are born pre-term (before 37 weeks) and 2 pass away before their first birthday.    Nationwide more than a half million babies are born prematurely across the United States which represents the largest reason for infant mortality.

The Wilson Family of Pukalani are serving as the 2011 Ambassador Family.  They have been supporters of the March of Dimes since the surprisingly early birth of their daughter Akeelah in 2008 on Maui.   According to the family, “We did everything right.  We never imagined our daughter would be the one of every eight babies to be born premature.  And never did we think it would be our daughter who wouldn’t survive.”

The Wilson family noted,  “It was the March of Dimes that provided us the most amazing support through our most difficult journey without our daughter in our arms.”

When the Wilsons found they were expecting again, excitement was quickly replaced by fear of another premature baby. Thanks to March of Dimes research, preventative measures could be taken which included careful and consistent monitoring to prevent preterm labor.   With diligent support from the physician community and the March of Dimes, the Wilsons gave birth to a healthy full term baby girl in 2010.

“Micah reminds us that with the support of so many, including the March of Dimes, we are making progress in the fight against prematurity and that there is hope for so many families.  We march so that every family has the opportunity to bring their baby home.”

To learn more about their team and how you can support the Wilson’s effort to raise money for the March for Babies visit Akeelah’s Home Page.   Funds raised by March for Babies in Hawaii support grant initiatives across the state aimed at improving birth outcomes and family support services at Kapiolani’s Neonatal Intensive Care Unit.

The 2011 March for Babies is expected to attract hundreds of walkers from top teams Kmart and Longs, entertainment from Zenshin Daiko Drummers and Crazy Fingers, food and drinks provided by Ruby’s and muscle from the Air National Guard and Carpenters Union.

The March of Dimes is the leading nonprofit organization for pregnancy and baby health.   With chapters nationwide and its premier event, March for Babies, the March of Dimes works to improve the health of babies by preventing birth defects, premature birth and infant mortality. For the latest resources and information, visit marchofdimes.com or nacersano.org.  For questions regarding the walk please contact walk coordinator Blair at  463-1085 or email [email protected]. 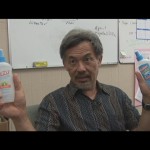 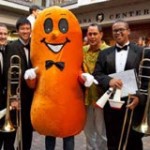