Organized by long-time local tennis coaches and league organizers, Jane Sakakihara and Mike Kinoshita, this event brought the business, tennis and government communities together. Mayor Arakawa, sporting Wimbledon whites, along with Councilmember Bill Medeiros, showed up bright and early to kick off the event and played several rounds of tennis on center court. 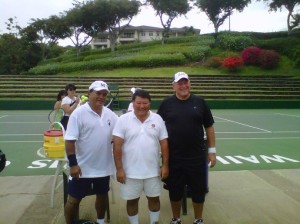 Players came from all over the island, all day long, to participate in this marathon-like event.

Wailea Tennis Club director Cathy Nicoloff and her staff ran a fun and flawless event and helped to generate over $10,000 in donations. Donations came from the player entry fees for the round robin doubles drop-in tournament, food and drink purchases, and the silent auction that ran throughout the day.

Donations for the silent auction came from businesses throughout Maui County, including rounds of golf, hotel stays, art, and more. 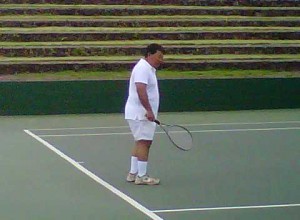 Mayor Arakawa opened the tennis fundraiser for Japan with a game on center court at the Wailea Tennis Center. Photo by Sonia Isotov.