Nurses from Maui Memorial Medical Center took the opportunity to argue their case over pay with Gov. Abercrombie at the MACC yesterday.

The “Conversation with the Governor” event at the Maui Arts and Cultural Center was moderated by Tom Rodriguez-Blackburn and offered residents the opportunity to submit questions.

While all other Hawaii Government Employee Association (HGEA) members have agreed to cuts to pay and benefits, HGEA nurses have not. When Abercrombie approached the audience, Maui nurses came forward to put questions to the governor. The exchange appeared heated at times. This video, shot by Elaine Bridge, captured the exchange.

“We have a revolving door issue with staffing [at MMMC],” Duarte told Maui Now via phone. “We’re losing nurses who can get better pay elsewhere, and are left with inexperienced nurses.”

Currently, the starting pay for an entry-level nurse at MMMC is $30/hour, which rises to $35/hour after two years, according to Duarte. However, Duarte herself, who claims to have 24 years of experience, and a Masters in Nursing, makes only $37/hour. 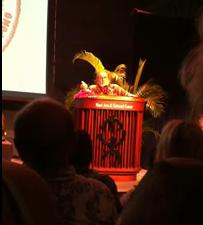 Gov. Abercrombie responds to the nurses' pay issue at the MACC, May 15 2011. Image courtesy of Elaine Bridge.

“Nurses at private hospitals on Oahu make around $55/hour.”

As a result, MMMC hires “traveler” nurses to fill staffing gaps, which costs the system $100/hour after pay and expenses. Duarte cites this as government waste, when the money could be better spent on keeping resident nurses. There are around 55 such traveler nurses at any one time.

She says nurses working for the state are asking for “comparable wages” to what nurses are making elsewhere. When asked where the money for the pay rises would come from, Duarte indicated that it was an issue of priorities and that the government was “robbing Peter to pay Paul” in diverting money from public employees to favored government programs. However, Duarte could not name any such government program specifically.

The governor has so far not responded to requests for comment on this story. However, in his specific reply to the question on nurses’ pay at the May 15 talk at the MACC,

Abercrombie said that the major private hospitals on Oahu “just went bankrupt.” He also said that every other public employee voluntarily (by vote) agreed to pay 10%

extra for benefits and take a 5% pay cut (video below).

“A whole lot of people want a comparable wage to other people everywhere…[but] we’re in an economic crisis here,” said Abercrombie.