California Man Dies in Fall From Bicycle in Kona

A California man sustained fatal injuries in a fall from his bicycle reported on Thursday, July 14, 2011 in Kona on the Big Island.

Big Island Police responded to a report of a crash at 1:18 a.m. on Alii Drive.  When Kona patrol officers arrived, they found a man lying next to a bicycle.

Authorities have since identified the man as Anthony Hernandez, 24, of Simi Valley, California.  According to Big Island Police, the man had been riding the bike when he lost control, fell, and struck his head on the pavement.  He was not wearing a helmet.

Hernandez was transported to Kona Community Hospital in critical condition with head and face injuries.  He was later transferred to the Queen’s Medical Center on O’ahu where he died Sunday morning, July 17.

Police initiated a public accident case and are also investigating the possibility of the influence of intoxicants in the crash. 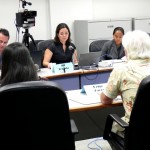