Baldwin Stays Unbeaten in Boys Hoops With Rout of Warriors

The win improved the Bears unbeaten record to 7-0, while the Warriors fell to 1-6.

On Tuesday, the Bears used their patent fullcourt-pressure defense to break open a two-point, first-period advantage, 11-9, with an 11-2 second-period explosion.

Leading 22-11 at halftime, the Bears opened the second half with their motion offense that killed 90 seconds off the game clock before the Warriors were whistled for a foul that led to two free throws by Teva Eldridge.

The Bears went to their bench in the fourth period and Kamehameha Maui never got closer than the final outcome.

Baldwin’s Takushi added eight points and Eldridge six, while Erin Lindsey had a team-high seven points for the Warriors.

In girls basketball earlier in the evening, Tori Cambra had a game high 20 points to lift Kamehameha Maui to a 47-37 victory over Baldwin.

The Warriors (6-5) used a 14-1 third-quarter advantage to overcome a their 20-17 deficit at halftime. Jayden Almeida chipped in 11 for the winners. 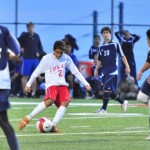