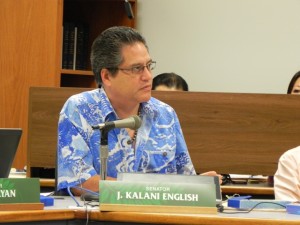 Sen. J. Kalani English was among the WAM Committee members who voted in support of SB2012. Photo courtesy Senate Communications.

Maui’s state senatorial delegation applauded the passage today of The Invest in Hawai‘i Act of 2012 out of the Senate Ways and Means Committee.

The aggressive $500 million general obligation bond-funded Capital Improvement Program package is aimed at creating shovel-ready jobs by investing and stimulating the local economy from across the state.

“Today’s vote marked another significant step in getting our economy back on track and immediately putting Hawaii back to work,” said Senate President Shan Tsutsui of Maui. “This continues to be the Senate’s main mission,” he said.

Sen. J. Kalani English, who represents East and Upcountry Maui, and the outer islands of Moloka‘i, Lana‘i, Kaho‘olawe, was among the WAM committee members who voted yes on the bill’s passage.

“This bold step will do two things: create jobs and repair our infrastructure. We need these projects to move forward,” said Sen. English. 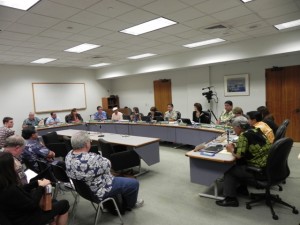 In order to expedite the backlogged repair and maintenance projects, SB2012 makes revisions to the State’s permitting, approval and procurement processes.

As a result, Maui’s senators say, the accelerated processes would in turn expedite the creation of jobs, and facilitate the return to work for residents.  Funding would be allocated depending on department needs and ability to commence work immediately.

Earlier this week, UHMC Chancellor, Clyde Sakamoto expressed his hopes that the legislature would support shovel-ready plans for the new teaching lab/hotel for the school’s Hospitality Academy.

Under the bill, allocations are included for the following:

The measure could create or sustain more than 5,000 jobs according to conservative estimates by the Department of Business, Economic Development and Tourism’s (DBEDT) job multiplier.

“This bill is on a fast track because the need to get our residents back to work is so great,” said Sen. Rosalyn Baker, who represents West and South Maui.

“It’s a win-win for Hawaii’s economy and Hawaii’s people.  These projects are needed and the hardworking men and women in Maui County and throughout the state want jobs,” she said.

Maui Mayor Alan Arakawa expressed strong support for the bill in written testimony saying, “In Maui County, our residents in the construction industry continue to suffer and are in immediate need of direct job creation.”

The Sierra Club submitted written testimony in opposition to the measure stating,  “This bill appropriates general obligation bonds for repair and maintenance projects–a positive step–but misguidedly exempts projects from all county permitting, licensing , and certification requirements if under one million dollars.”

Businesses testifying in support of the measure spoke to the economic benefit of the legislation saying the measure would have a positive rippling effect in terms of job creation, stimulating the local economy, and generating tax revenue.

PMJ Builders, Inc. submitted written testimony saying the bill would serve as “an economic stimulus tool to spur our economy and provide much needed jobs for our local citizens, while at the same time, addresses the long backlog of maintenance and repair to our aging physical facilities that have been deferred due to lack of funding.”

“Investing in renewable energy and upgrades to information technology initiatives throughout schools, hospitals, and other state facilities will ultimately lead to cost savings and a reduction of the State’s carbon footprint,” said Sen. Pres. Tsutsui. 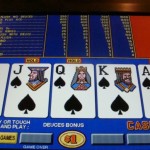 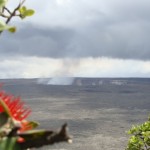