Albee Layer getting his $100,000 check. Photo courtesy of Taylor Steele on Instagram.

It’s official – on Wednesday, April 4th around 3 p.m. Albee Layer got a surprise visit from filmmaker Taylor Steele at Layer’s house in Haiku to be given his $100,000 check for being voted as the winner of “Section of the Year.”

Though Layer was fully aware of his immense support in Maui and beyond for the title, he was still ecstatic to see the results of his excellent surfing rewarded in such an exciting way.

20-year-old Layer will no doubt go far with an extra $100,000 in his board shorts and his ambitious plans for a career as one of the world’s best young surfers.

Maui Now asked Layer what he thinks won him “Section of the Year.” He responded, “I took the time and money it takes to accomplish something like this. That’s all it takes.”

Surrounded by his family and many friends in Haiku, Layer is spending the night celebrating with family, friends, cigars and countless bottles of champagne. 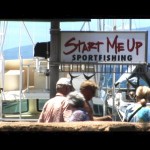