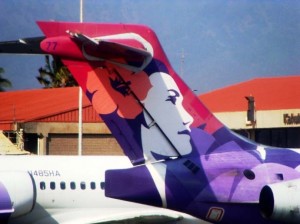 Hawaiian Airlines today implemented a new fare structure for neighbor island travel that lowers ticket prices across all of its fare classes from 4% to 25%.

The new rates are designed to stimulate increased neighbor island travel for residents.

Under the new fare structure, the lowest fare for a one-way nonstop inter-island flight (including taxes and mandatory federal fees) is $65 for travel from Honolulu to Kahului and Lihu’e.

The new structure’s three lowest fares from Honolulu to Kahului, Lihu’e, Hilo and Kona are all lower than the previously published lowest web fare (see chart below).

In addition, the airline’s parent company, Hawaiian Holdings, has signed a Letter of Intent to acquire turbo-prop aircraft with the aim of establishing a subsidiary carrier to serve routes not currently in Hawaiian’s neighbor island system. The turbo-prop subsidiary will allow Hawaiian to further expand capacity with daily flights to rural areas.

“We are committed to providing safe, frequent and reliable service that allows our residents to travel more easily between all the islands, and we believe the additional capacity and new fares will encourage that,” said Peter Ingram, the executive vice president and chief commercial officer for Hawaiian Airlines, in a written statement.