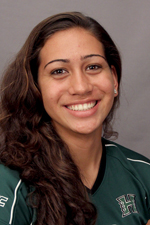 As the eighth-ranked University of Hawaii Rainbow Wahine volleyball team prepares for its season-opener against Albany on Friday, former Molokai High School standout Kalei Adolpho continues to battle for a starting position at middle blocker.

“Every day you have to come out and do well because there’s so much competition,” Adolpho told the Star Advertiser. “It pushes you beyond what you think you can handle.

“I played a lot of basketball this season and that’s carrying over. I think my endurance and movement are better. I’m excited for Friday.”

Hawaii opens the 2012 campaign hosting the Chevron Rainbow Wahine Invitational at the Stan Sheriff Center from Aug. 24-26. The Rainbow Wahine host Albany at 7 p.m. Friday. They will then face Saint Mary’s on Saturday, Aug. 25, at 7 p.m. before playing the tournament finale against Stanford on Sunday, Aug. 28, at 5 p.m.

Head coach Dave Shoji begins his 38th season at the helm of the Rainbow Wahine. AVCA All-American Emily Hartong along with all-conference players Mita Uiato and Jane Croson will lead the ‘Bows in search of their fifth straight tournament title.

Besides sophomore Adolpho, three others are fighting for two spots: junior Kristiana Tuaniga, sophomore transfer Stephanie Hagins and redshirt freshman Jade Vorster. While Adolpho appears to have secured one starting spot, Shoji said, “right now I couldn’t pick between the other three.”

Former Maui Interscholastic League Division I Player of the Year Ginger Long from Kamehameha Schools Maui is a redshirt freshman and reserve outside hitter.

Stanford headlines the challenging list of opponents having been ranked No. 6 with three first place votes in the AVCA Preseason Coaches Poll. The Cardinal advanced to the second round of the NCAA Tournament last season, finishing with a 22-8 overall record and a No. 14 national ranking.

Albany comes in as one of the America East Conference’s perennial powers. Last season the Great Danes won the America East for the sixth time, earning a berth to the NCAA Tournament before falling to No. 21 Florida State in the first round. Saint Mary’s also enter the invitational as a formidable opponent with a 2011 overall record of 17-12.

Ticket Information: Tickets can be purchased online, at Stan Sheriff Center Box Office, or by phone at (808) 944-2697.

Promotions: Chevron will distribute a total of 750 rally towels and pom-poms before each UH match and will award over $700 in gas during the tournament. Fans can register at the sports marketing table located inside Gate A for a chance to win. 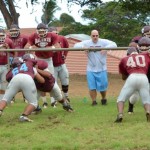 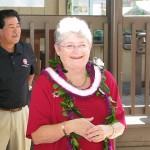