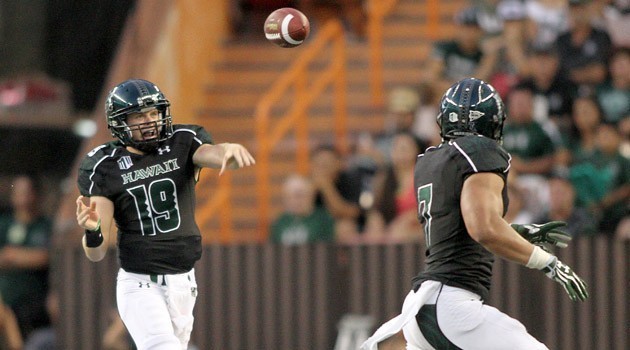 The University of Hawai’i Warrior football team will play its first Mountain West Conference game when it hosts Nevada, Saturday, Sept. 22 at Hawaiian Airlines Field at Aloha Stadium. The game will be televised nationally on NBC Sports Network and will kick off at 4:30 p.m.

The Warriors (1-1) handed head coach Norm Chow his first victory last Saturday after a 54-2 rout of Lamar. UH scored twice on special teams and the defense did not allow any points for the first time since 2005.

Nevada enters the game with a 2-1 record including a 45-34 victory over Northwestern State last week in Reno. The Wolf Pack generated 655 yards of total offense in the victory and currently ranks ninth nationally averaging 551.3 yards per game.

The game marks the first MW contest for both teams. The two schools along with Fresno State joined the conference this season (UH as football only members). The teams have met 16 previous times with each team winning eight times. The Warriors have won the last seven meetings in Honolulu and Nevada’s last win in the 50th state occurred in 1948.

Radio: ESPN 1420 AM will carry the game live with Bobby Curran (play-by-play), John Veneri (analyst), and Felipe Ojastro (sidelines). Chris Hart and Gary Dickman host the “Countdown To Kickoff” beginning at 3:00 p.m., and also the halftime show. Neighbor islands can listen live on KNUI on Maui, KHLO in Hilo, KKON in Kona, and KTOH on Kaua’i.

Promotions: Hawaiian Telcom and Jack In The Box are the game sponsors. Hawaiian Telcom will distribute 5,000 sling-a-string backpacks and Jack In The Box will distribute 20,000 VIP cards good for a 10-piece order of chicken nuggets (available at all stadium gates).  Also, UH students have the chance to compete in the “Quarterback Challenge” and win a Vacations Hawaii Trip to Las Vegas during the first timeout of the fourth quarter (register at Gate 7). Two lucky fans will win prizes from Hawaiian Telcom and Jack In The Box during the pre-game “Boot for Loot” field goal contests (register at Gate 3). 3,000 green & white pom poms will be distributed in the UH student sections. Fans are encouraged to visit the Chevron Family Fun Zone before the game in the parking lot across from the stadium ticket office.  Also, register at Gate 4 or 6 to win the “Best Seats In the House,” compliments of Papa John’s Pizza Hawaii and NAPA. The Farmers Hawaii Supa Bowzooka will be launching T-shirts into the stands between first and second quarters.

Saturday’s contest marks the inaugural Mountain West Conference game for both teams…UH has won the last seven meetings between the teams in Honolulu, including all six conference match-ups. The last time Nevada defeated UH in Honolulu was in 1948…The last three games held in Honolulu has been decided by seven points or less…UH has lost its last two conference home games dating back to last year…UH has not allowed a team to rush for more than 100 yards this season and ranks 11th nationally allowing 62.5 yards per game. Nevada ranks seventh nationally in rushing offense at 305.3 yards per game and is coming off a 418-yard performance against Northwestern State last week…Nevada offensive coordinator Nick Rolovich is a former Warrior quarterback and most recently served as UH’s offensive coordinator for the past three seasons…UH is making its second of six national TV games this season. 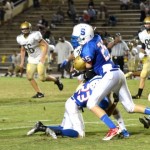 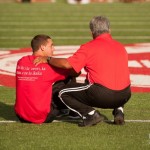