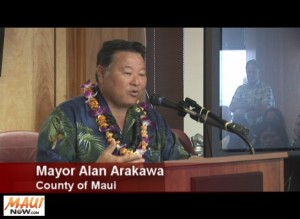 Maui Mayor Alan Arakawa today called a settlement reached between the county and the Environmental Protection Agency a “win-win.”

The agreement seeks to resolve alleged air pollution violations at the Central Maui Landfill in Puunene, through fines, compliance measures, and the installation of a wind turbine facility to offset power costs at the landfill.

“We are pleased that a major component of the agreement is the installation of a small eight-turbine wind farm that both supports Maui County’s commitment to clean energy and will act as the county’s pilot project for small-scale wind energy facilities,” said Mayor Arakawa.

“As an additional benefit, the electricity produced by the windmills is anticipated to supply a significant percentage of the electrical requirements of the landfill,” he said.

County officials released information today saying the windmill project will be installed near the landfill’s self-service facility, and are anticipated to be “barely visible” from the roadway.

The settlement seeks to resolve allegations that the county violated the Clean Air Act by failing to design, construct and operate a gas collection and control system; apply for a permit from the state Department of Health; prepare a start-up, shut-down and malfunction plan; and operate controls within the gas temperature limit.

County officials say the agreement resolves the EPA’s allegation that the county installed and began operating a gas collection and control system later than the federal law allows. The system has since been installed and is operating as designed.

“The county is currently exploring options for using the landfill gas collected by the GCCS to produce energy,” said Mayor Arakawa.

“The current state of technology coupled with the high cost of electricity produce an ideal atmosphere for cost-effective waste-to-energy projects. My administration remains committed to fully investigating and implementing solutions that will make Maui County a leader in clean energy,” he said.

The consent agreement is still subject to a 30-day public comment period.

Upon entry of the agreement by the court, the county will pay a $380,000 fine to the EPA, a sum that is based on the costs avoided by the two-year delay in installation of the GCCS.

The EPA also released information today that the county will spend an estimated $5.1 million on compliance measures and renewable energy projects as part of the agreement. 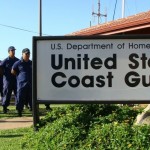 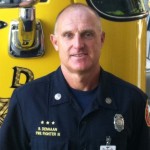