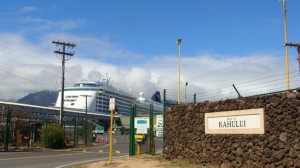 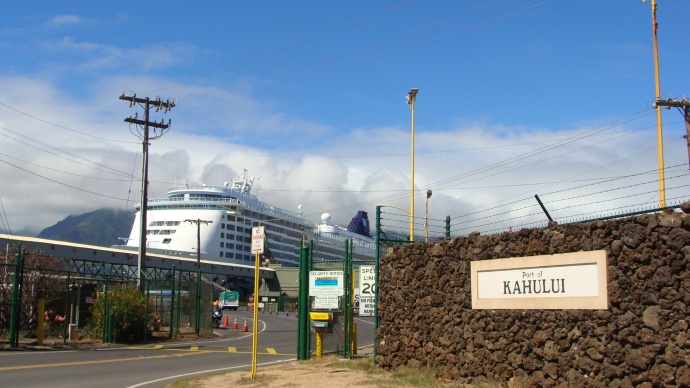 Port of Kahului, photo by Wendy Osher. Hours after a tsunami warning was cancelled, activity in Kahului Harbor began resuming to normal operations. The Pride of America cruise ship has pulled into port as depicted in this photo taken on Sunday morning, 10/28/12.

Crews from the County of Maui continue to assess whether any damage was caused by the overnight tsunami waves.

To assist the county in its tsunami assessment, officials are asking residents to report any damage that they may find by sending information and photos via email to County Communications Director, Rod Antone at [email protected]

The state was placed under a tsunami warning at 7:09 p.m. on Saturday, Oct. 27, following assessment of a 7.7 magnitude quake that occurred at 5:04 p.m. in the Queen Charlotte Islands Region.  The warning was then downgraded to an advisory at 1:02 a.m. on Sunday, Oct. 28.

The National Weather Service reports that tsunami wave heights across the state are now below advisory levels and continue to diminish; however they are asking boaters and swimmers to exercise caution.

County officials say this will be the final notification regarding the tsunami event unless additional information is received.

***Tsunami aftermath video and images from our Maui Now crew are available at the following direct LINK [2]. 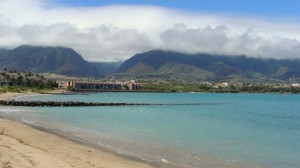 The Coast Guard Captain of the Port of Honolulu worked with state and county officials, and successfully completed the re-opening of all Hawaii ports on Sunday. Federal, state and local authorities confirmed that all harbors were safe for re-entry by Sunday morning.

Coast Guard and local officials previously ordered the evacuation of able vessels from local harbors Saturday, after a tsunami warning was issued for Hawaii. Coast Guard officials say the evacuation was undertaken in an attempt to ensure public health and safety, protect the environment and preserve harbor infrastructure from inbound tsunami surges.

The Coast Guard Marine Transportation System Recovery Unit organized the safe departure of commercial vessels weighing more than 200 gross tons, that were required by the captain of the port order to travel to a safe distance offshore.

During the night, Coast Guard officials say their crews assisted with multiple safety situations. According to authorities, several vessels ran out of fuel offshore and were later towed in by Coast Guard crews.

“I was very impressed by the safe and timely evacuation of the ports, coordinated harbor assessments and orderly return of vessels once the ports were reopened.” said Capt. Joanna Nunan, Captain of the Port in a media statement today. “This was truly a team effort with the state, counties, maritime industry and boaters.” 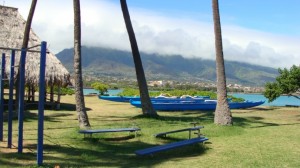 [4]
Life in Kahului was returning to normal after an overnight tsunami warning that forced the evacuation of low-lying areas. On Sunday morning, October 28, 2012, activity at Kahului Harbor was minimal, with no visible signs of damage along the shoreline fronting the Hawaiian Canoe Club. Photo by Wendy Osher,