*** The information is provided as a service to the public, as a way to heighten community awareness of police response in respective communities. Supporting information provided by Maui Police. 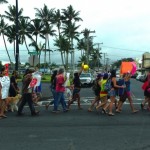