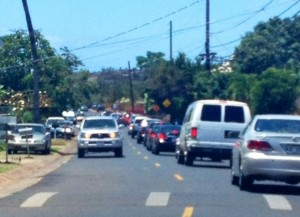 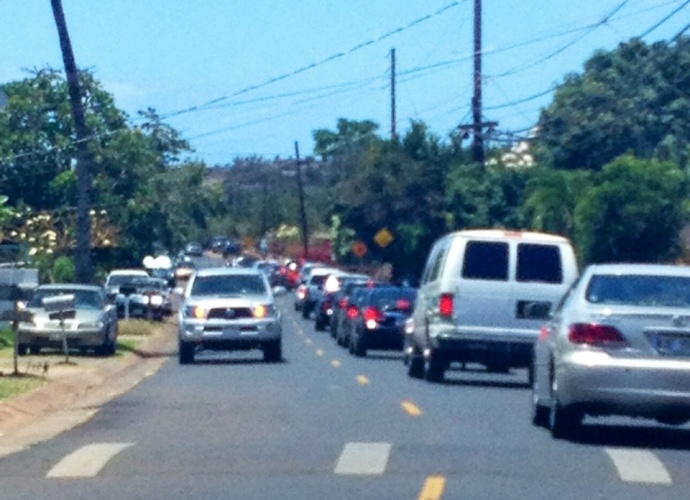 A fatal afternoon traffic accident on the Honoapiʻilani Highway was reported on Saturday in Lahaina at the Kapunakea Street intersection. Photo by Vanessa Wolf.

A 33-year-old Maui man suffered fatal injuries when the bicycle he was operating collided with a truck at the Honoapiʻilani Highway (30) intersection at Kapunakea Street on Saturday afternoon, May 4, police said.

Police have since identified the bicyclist as Gary-Dean Kahunanui of Lahaina.

According to a police report, Kahunanui was traveling west, down Kapunakea Street at around 12:14 p.m., when he entered the Honoapiʻilani intersection against a solid red light.

As Kahunanui crossed the intersection, he was stuck by a commercial freight-liner box-van truck traveling north on the Honoapiʻilani Highway in the left lane, police said.

According to police, the 52-year-old Kahului man driving the truck was using his seatbelt and was not injured in the crash.  Police say he was the lone occupant of the vehicle and had a green light when he entered the intersection.

Police Officer Lawrence Becraft with the Department’s Traffic Division filed a vehicle crash synopsis that stated Kahananui sustained fatal injuries and died at the scene of the crash.  Police say he was not wearing a helmet.

The incident was Maui fifth traffic fatality on county roads in 2013, compared to 10 at the same time last year.

The traffic investigation forced the temporary rerouting of traffic in the area until 3:20 p.m.

A separate accident was reported at 11:06 a.m. on the Kula Highway (37) at ʻŌmaʻopio Road in Kula near Waipuna Church.

Maui Police Lt. William Juan said three individuals were transported to the hospital with non-threatening injuries from the crash that involved a single vehicle that had flipped over.

Kula Highway was closed from 12:08 to 3:02 p.m. and raffic was diverted until the accident was cleared.

A morning accident was also reported at around 6:38 a.m. on Pūlehu Road in Kahului, between Hansen Road and ʻŌmaʻopio Road. Crews from Maui Electric Company responded to the scene to repair a downed electrical pole at the location.