A 69-year-old Kaunakakai woman suffered fatal injuries in an afternoon traffic crash on Molokaʻi, according to police.

Police say a preliminary investigation indicates that a van collided into the rear of a motorized scooter that the woman was driving, as both vehicles were headed east on Kamehameha V Highway at around 2:22 p.m. on Thursday, May 9.

Both vehicles were within the east bound lane of the road when the accident was reported in the area of Kapaʻakea Loop in Kaunakakai, according to police reports.

Maui Police Captain John Jakubczak issued an update stating that the scooter operator was transported to the Molokai General Hospital where she later died.  The operator of the van, meantime, a 60-year-old Kaunakakai man, was not injured in the crash, according to Capt. Jakubczak. 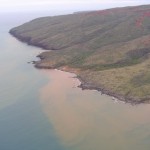