A Lahaina man was critically injured in a three-car crash on the Honoapiʻilani Highway on Sunday afternoon, June 30, 2013, police said.

The accident was reported at 12:24 p.m. in an area southeast of Mile Marker 13 of the Highway in Olowalu.

According to police reports, the 52-year-old Lahaina man was traveling towards Māʻalaea when the vehicle he was operating crossed the center line and sideswiped a vehicle carrying four people that was traveling in the opposite direction.

Maui police say the first vehicle then spun counter-clockwise and collided into another vehicle that was Lahaina-bound, which was being operated by a 19-year-old Kahului woman.

Maui police say all occupants were wearing seatbelts and airbags on all three vehicles deployed.

Authorities say the cause of the crash remains under investigation.

The accident forced the complete closure of the highway for two hours between 12:45 and 2:45 p.m., followed by alternating traffic from 2:45 to 3:45 p.m.  The road was reopened at 3:45 p.m., but traffic remained backed up in the hours following the all-clear.

(Update: 5:51 p.m. 6/30/13) Traffic Update: The Honoapiʻilani Hwy remains open following a traffic accident reported earlier today; however, traffic is backed up to Dickenson coming out of Lahaina, and backed up to North Kīhei Road headed into Lahaina. Expect delays as traffic continues to resume its normal flow. The road was reopened at 3:45 p.m.
(Update: 3:45 p.m. 6/30/13) Honoapiʻilani Hwy Update: Both lanes are OPEN, but, traffic moving very slow. Please drive safely and expect delays.
(Update: 2:49 p.m. 6/30/13) Maui Police now ALTERNATING traffic on the makai (ocean side) lane of Honoapiʻilani Hwy area of mile post 14 in Olowalu. The road was closed in both directions for about two hours between 12:45 and 2:45 p.m. Drive safely! 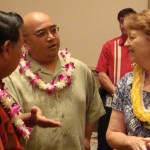