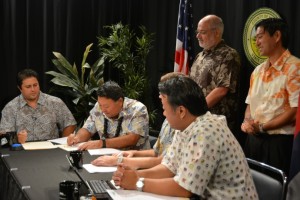 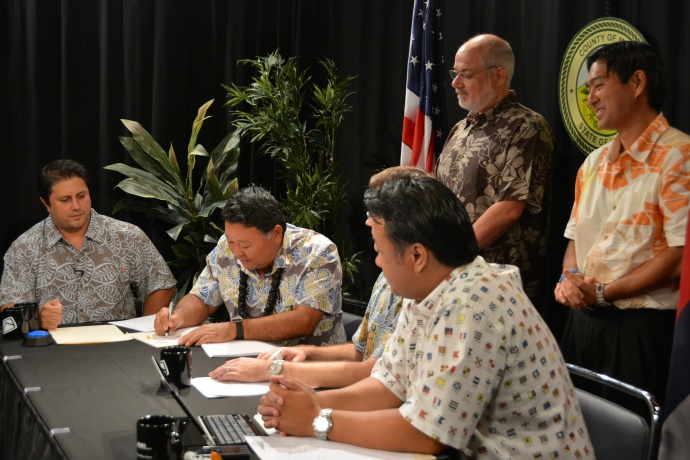 Maui Mayor Alan Arakawa announced the signing of an agreement this week to finance and build an Integrated Waste Conversion and Energy Project on Maui.

According to the announcement, the facility is expected to be fully operational in 2017, and is “projected to divert approximately 85% of the county’s municipal solid waste from disposal at the Central Maui Landfill.”

The agreement with Maui Resource Recovery Facility, LLC, was reportedly signed on Wednesday, Jan. 8, during the mayor’s live television show at the Akakū studios in Kahului.

In a press release statement this afternoon, Mayor Arakawa said commented on the project saying:

“The County embarked on this project to foster creation of on-island renewable energy and land use sustainability. The Maui Resource Recovery Facility’s solution bolsters recycling efforts for the community and advances significant landfill diversion, while providing a considerable net environmental benefit, renewable fuels and long-term cost savings in the millions of dollars over the 20-year term of the agreement.”

In addition to diverting waste from the landfill, county officials say the facility will also include a recyclable materials recovery center where metals, glass, cardboard, plastic and paper will be separated into “digestible organic fraction” and “residual matter.”

County officials say the “organic fraction” will go to a “closed anaerobic digester,” which will produce renewable natural gas and other “marketable commodities.”

According to the announcement, the residual matter will be processed into a clean solid fuel that can be used to replace imported coal.

Arun Sharma, the president of Anaergia Services, which was selected as a partner for the project [2] said, “Once operational, this project will incorporate and integrate leading technologies for material recycle and renewable energy production, which will make Maui a beacon for environmental sustainability.”

According to information released by the County of Maui, construction and operation of Maui Resource Recovery Facility is expected to provide an estimated 150 construction jobs and up to 40 operations jobs.