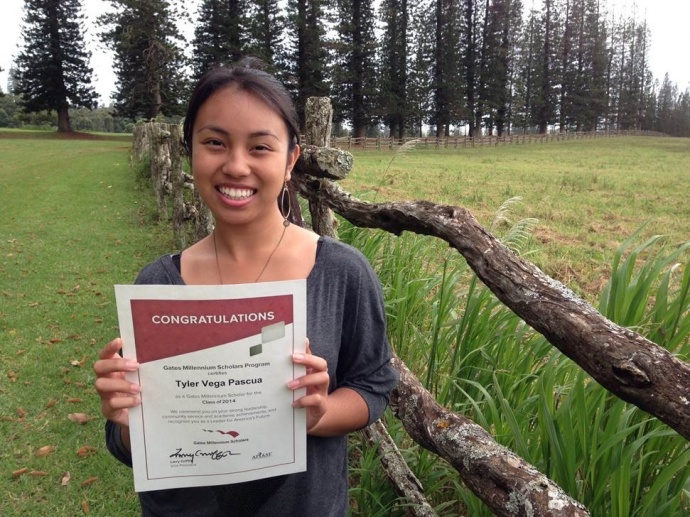 Two Maui students are among only three in the state selected as recipients of the prestigious Gates Millenium Scholarship Award.

Tyler Vega Pascua, a senior at Lāna‘i High and Elementary School is also the first-ever student from Lāna‘i to be selected for the award.

Also in her company are Kailey Rishovd of Maui High School in Kahului; and Bram Paikuli of Keaʻau, who attends the Kamehameha Schools Hawaiʻi campus.

The three students are among an elite list of just 1,000 recipients chosen across the nation in 2014, out of the 52,000 applications received for the competitive award.

The Gates Millennium Scholars Program is funded by a grant from the Bill & Melinda Gates Foundation, and provides scholarships to minority students with high academic and leadership promise who face significant financial need. Since its inception in 1999, the program has funded more than 16,000 scholars, with the average award around $12,227, according to the scholarship website.

“Going to college has always been a goal of mine and I am so grateful to receive the Gates Millennium Scholarship,” said Pascua in a press release announcement issued by Pūlama Lāna‘i, the company owned by Larry Ellison that is responsible for operating the island of Lāna‘i.

Pascua is the student body president at Lāna‘i High and Elementary School, and volunteers as a peer mentor for the school’s College + Career Network, the announcement said.

The network is a resource brought in by Pūlama Lāna‘i to help students to envision and pursue post high school opportunities and later return to Lāna‘i to work in high-tech, high paying jobs, company executives said.

“Tyler’s determination and hard work are an inspiration to all of us on Lāna‘i,” said Elton Kinoshita, principal of LHES in the announcement. “We also thank Pūlama Lāna‘i and the College+Career Network for supporting Tyler and other high school students with college and career counseling resources that have exposed them to a number of opportunities that they may not have been able to pursue otherwise.”

According to Pūlama Lāna‘i, Pascua plans to attend the University of Nevada, Las Vegas as a first-generation college freshman in the fall of 2014, with a goal of becoming a nurse and returning to Lāna‘i to work at Lāna‘i Community Hospital. 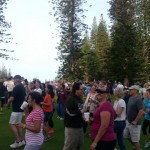