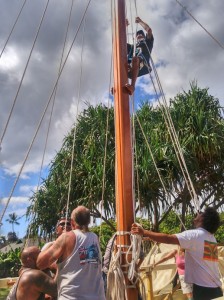 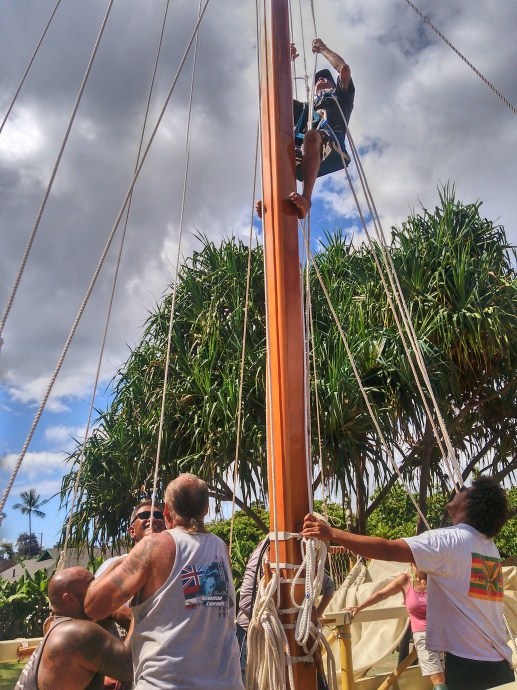 Maui’s own voyaging canoe, the Moʻokiha o Piʻilani, is scheduled to launch on Friday, July 11, from Māla Wharf in Lahaina.

The 62-foot double-hulled traditional sailing canoe has been under construction for the last 17 years at Kamehameha Iki Park in West Maui, but work to build the vessel actually began in the mid 1990s.

Prior to the launch, crews will slowly roll the vessel 1.4 miles up Front Street during the early morning hours on July 7.

The 12 a.m. procession will be preceded by canoe protocol by Keʻeaumoku Kapu and Na ʻAikane o Maui beginning at 10 p.m. on Sunday July 6 at the Hui o Waʻa Kaulua offices located at 525 Front Street.

The canoe launch the following week on July 11, was scheduled in conjunction with the Akua Moon and the highest tide of the month, according to Hui o Waʻa Kaulua, Maui’s Voyaging Society.

The formal Hawaiian Canoe Launch ceremony will be led by Kumu Keli’i Tau’a and Kahu Lyons Naone, and will include participation from island canoe clubs that will tow the vessel into the ʻAuʻau Channel. 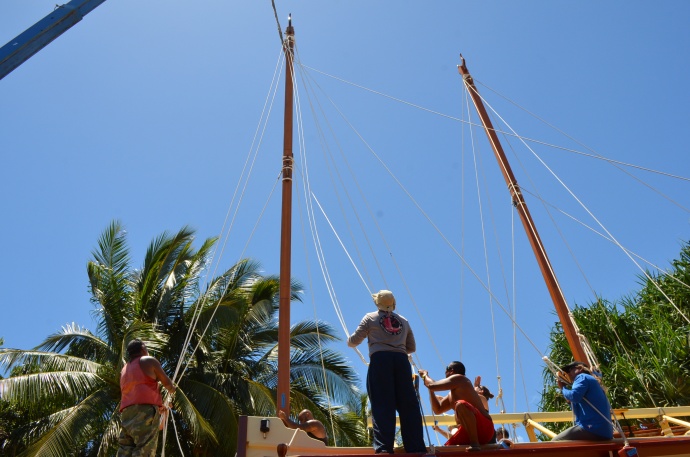 38 foot masts are hoisted aboard Moʻokiha o Piʻilani and crew members seat the masts and tie down the stays. This is the last milestone before the canoe moves to Mala Wharf for a July 11 public launch. Photo by Aimee Paradise.

Captain Timi Gilliom said he plans to take the vessel north and circle around in front of Canoe Beach before heading south back to the vessel’s mooring off of Pākalā Beach fronting Kamehameha Iki Park in Lahaina.

“If there is wind, we’ll sail — if not, an escort boat will tow us,” said Gilliom in the announcement.

After the 5 p.m. launch, the Maui community is invited to join Hui o Waʻa Kaulua at their offices for a hoʻolauleʻa celebration that will include food and music.

As part of the historic event, advisory updates on the launch and events leading up to the occasion will be broadcast on KPOA 93.5 FM.