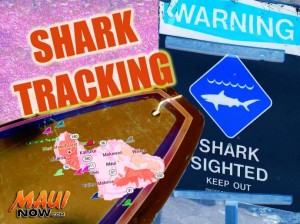 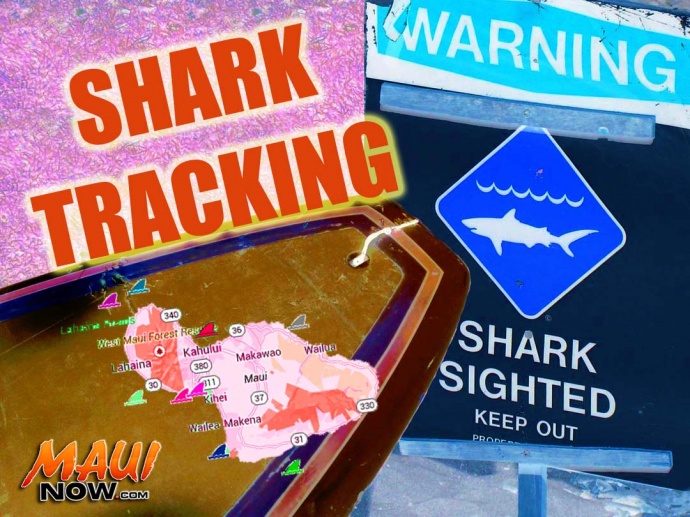 A total of 24 tiger sharks [2] off of Maui are now being tracked with satellite tagging devices as researchers with the University of Hawaiʻi continue to study their movement following an increase in the number of unprovoked shark bite incidents last year [3].

University officials say the sharks were captured and fitted with the tracking devices [4] off of Kīhei, Olowalu and Kahului, Maui beginning in 2013 as part of the ongoing study; and that similar efforts were launched off of Oʻahu in October to provide a comparative assessment.

According to new information released by the University of Hawai‘i, Institute of Marine Biology, the tagging efforts are providing new insights [5] into the coastal habitats most frequently visited by tiger sharks around Maui.

“We are seeing a strong preference for coastal shelf habitats shallower than 600 ft,” said Dr. Carl Meyer from the Hawai‘i Institute of Marine Biology in a press release statement on Thursday. “Although these sharks also roam far out into the open-ocean, they are most frequently detected in the area between the coast and the 600 ft depth contour which is up to 10 miles offshore around Maui,” he said.

Around Maui, the study shows that coastal sites frequently visited by tiger sharks are directly offshore of several popular surfing and swimming beaches; but new studies off of the island of Oʻahu are showing slightly different results so far.

“We are seeing the exact same depth preferences around O‘ahu, but the most frequently used sites don’t line up with popular swimming and surfing sites to the extent that they do around Maui,” said Dr. Kim Holland, senior shark scientist also with the UH Hawai‘i Institute of Marine Biology in the press statement.

While observations are developing, Dr. Holland cautioned that the O‘ahu data in particular is still “very preliminary.”  He continued saying, “Both O‘ahu and Maui have high levels of recreational ocean use, yet Maui has a higher rate of shark bites. We are trying to determine why.”

“We need to understand tiger shark movements [6]in our coastal waters to gain a clearer comprehension of the circumstances bringing sharks and humans together,” said Dr. Holland. 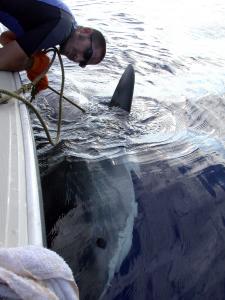 Each animal was tagged with a transmitter that emitted high frequency sound in a unique code. File photo courtesy University of Hawaiʻi.

The Maui and Oʻahu tiger shark tracks are available online [8] at the Pacific Islands Ocean Observing System website, which manages the data and provides funding for ongoing research operations.

DLNR launched the $186,000, two-year study [9] to focus on tiger shark movements around Maui [10], and compared their behavior to that of known movement patterns around the other main Hawaiian islands.

Shark bite incidents reported so far this year in Maui waters include the following:

There were a total of eight shark bite encounters reported on the state’s Hawaii Sharks website [16] in Maui waters in 2013: