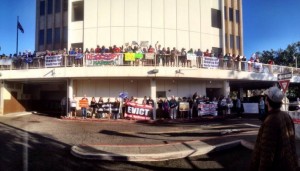 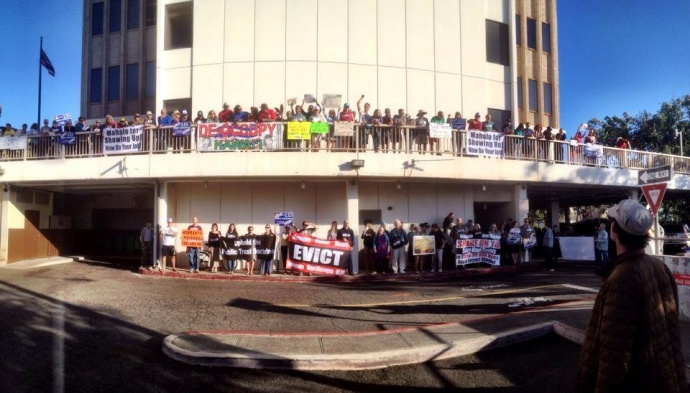 A hearing on Maui’s GMO initiative that was scheduled for today in federal court will not proceed as planned.

The hearing was supposed to be on SHAKA’s request to have the case decided in Maui State Court and the County of Maui’s request to dismiss SHAKA’s separate lawsuit to enforce the ordinance.

Parties in the case were notified that the court would decide on motions in the case without a hearing, a move that was met with disappointment by members of the SHAKA Movement and five Maui residents–Dr. Lorrin Pang, Mark Sheehan, Leiʻohu Ryder, Bonnie Marsh and Alika Atay–who introduced and advocated for passage of the initiative.

The group plans to hold a demonstration today in front of the County Building to voice their support of the measure and for its implementation, saying they “will be heard.”

County communications director Rod Antone responded saying, “the protesters know that the case is before the Federal Court, which is why they scheduled their initial rally there in the first place.” He said, “the county is waiting for the court’s decision like everyone else.”

According to an event announcement, the group is holding the demonstration to “demand that the vote be upheld in spite of the efforts of both the County and Federal Court to negate,” the November vote, “thus allowing for harm to continue.”

The group says they are, “calling out for the Public Trust Doctrine to be recognized as valid.”

A request for comment on Monday from representatives at Monsanto was not returned in time for this publication.

The hearing was originally scheduled earlier this month, but was postponed in light of two senate bills that would restrict the counties’ ability to employ agricultural practices allowed by state and federal law.

The county is a party in two lawsuits relating to the Maui GMO initiative that would require a temporary moratorium on the cultivation of genetically engineered organisms in Maui County. Residents voted to approve the measure during the November 2014 General Election.