Two Kahului residents are safe after the boat they were in capsized and ran aground on the rocks one bay to the south of Polo Beach, in Wailea on Sunday afternoon.

Fire officials say the incident was reported at 3:25 p.m. when a distress call was received regarding a boat near Polo Beach, in South Maui.

Wailea firefighters arrived at 3:34 p.m. to find the 14-foot boat capsized with the boat’s two occupants already on shore and uninjured.

Fire crews helped the male and female gather their belongings in the water and other items that were washing ashore with the surf. At around 5 p.m., ocean safety personnel on rescue watercraft also assisted fire crews by flipping the boat right side up, and then towed the boat back to the Kīhei Boat Ramp.

Fire officials say the Kahului couple was returning to the Kīhei Boat Ramp after a morning trip to the Kanaio area, just east of La Perouse Bay in Mākena. As they were nearing Polo Beach, a large wave capsized their boat and they drifted onto the rocky shore, said Maui Fire Services Officer Edward Taomoto.

Engine and ladder crews from Wailea and ocean safety personnel from Kīhei responded to the incident.

Stand-Up-Paddle Boarder and Child Assisted to Shore at Papalaua 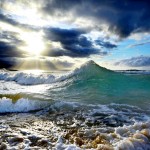