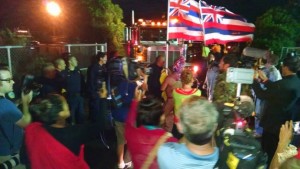 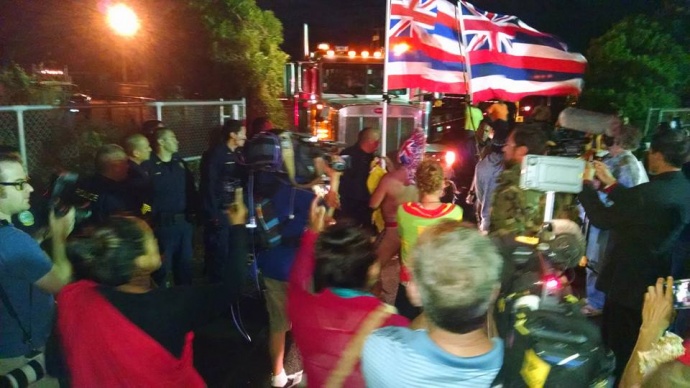 The group Kākoʻo Haleakalā is mobilizing for the third time in protection of Haleakalā with demonstrations planned on Wednesday, Aug. 19, 2015 at the Central Maui Base Yard on Mokulele Highway and at the junction of Haleakalā Highway (Crater Road) and Kekaulike Avenue.

“We call upon our poʻe Aloha ʻĀina to join together in asserting our human rights to prevent further desecration of our Hawaiian sacred sites and National lands,” said Kahele Dukelow in an organization press release.

The group of demonstrators on Maui said the issue remains under deliberation at the state Supreme Court, and should not proceed without the blessing of the community.

The convoy is the third scheduled [2] since June.  On June 25th, a convoy did not depart as planned [3] due to a similar overnight vigil, and 20 individuals were arrested after trying to block a subsequent convoy [4] on July 31st.

The Kākoʻo Haleakalā group says the individuals were charged with multiple violations including: refusal ingress/egress; failure to disperse; and disorderly conduct hazardous condition. The original charges included resisting arrest, but that charge was subsequently dropped, according to group representatives.

The Daniel K Inouye Solar Telescope, formerly known as the Advanced Technology Solar Telescope Project or ATST, is located outside of park boundaries. The project is managed by the Association of Universities for Research in Astronomy and is a non-profit, 501(c)(3) corporation.

Telescope advocates say that once construction is complete, the DKIST will be the world’s largest ground-based solar telescope [5] and will offer scientists unprecedented high-resolution images of the sun using the latest adaptive optics technology and distortion-free imaging.

Members of the Kākoʻo Haleakalā group say the construction is an “unwelcomed venture,” and that the rights and concerns of the community are being ignored.

Kākoʻo Haleakalā organizers continue to assert its stance in protection of Haleakalā against the State of Hawaiʻi, University of Hawaiʻi, Institute for Astronomy, National Science Foundation and National Solar Observatory.

“Kākoʻo Haleakalā stands for Aloha ʻĀina and encompasses a wide range of issues including the perpetuation and protection of sacred space, the environment, archaeological and cultural sites and Hawaiian National lands,” members said in a press release announcement.

“Hawaiians have never consented to the taking of our Hawaiian National lands and we will continue to protect them. In the words of our mele aloha ʻāina or song of Hawaiian patriotism ‘Kūpaʻa ma hope o ka ʻāina.’ ‘We stand firmly behind the ʻāina,'” the press release stated.