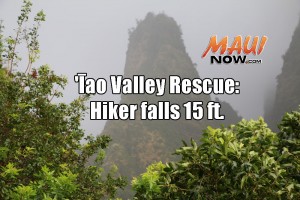 At 3:25 p.m. Thursday afternoon, firefighters responded to a female that fell above Kepaniwai Park in ʻĪao Valley.

At 3:41 p.m., Engine 10 and Rescue 10 from Kahului arrived at the park and found that a 21-year-old female had fallen from a trail above the Hawaii Nature Center, at Kepaniwai Park.

After tumbling down a very steep embankment and falling off a 15-foot vertical drop, the woman, visiting from California, was knocked unconscious for roughly 30 minutes. When rescue crews got to her, she was sitting up on a rock with her male companion.

Firefighters rappelled down to the woman and treated her for head injuries before securing her in a protective rescue basket. To get the woman out, firefighters set up a rope system so she could be hauled back up to ʻĪao Valley Road. The dense overhead tree canopy prevented the use of the department helicopter.

Paramedics took over treatment at 5:38 p.m., then transported her to Maui Memorial Medical Center in stable condition.

The Kahului engine crew responded to the incident along with Rescue 10 because Wailuku firefighters were on another emergency call at the time.

Rescue crews are responding to a report of a female who fell about 15 feet near a swimming hole above the Hawaiʻi Nature Center in ʻĪao Valley.

Emergency crews were on scene at last report. 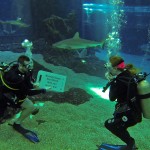 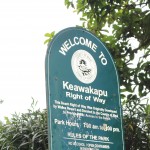